ATHENS, OH – When Katie Meyers was an Ohio University student volunteering at WOUB Public Media, it was the first time she experienced what it was like to be part of a close-knit team that felt like family.

“There was an energy at WOUB that I have tried to recreate throughout my career,” said Meyers. “Everyone was learning and willing to try something new. They were willing to step out of their comfort zone. Not only did I get professional experience, but I also benefitted from being around an innovative environment where everybody was up for anything.”

Meyers is now a producer at WPIX 11 in New York City. She produces the news and lifestyle hour of the morning show.

“I’ve always wanted to live and work in New York,” said Meyers. “I identified with this city when I was a kid, and I knew I had to work here one day. I feel like I am the kind of person that will never stop setting the bar higher for myself. The sky is the limit.”

Meyers grew up in Kirtland, Ohio near Cleveland. Her brother attended Ohio University, and she visited quite a few times during those years. Meyers knew she wanted to study journalism, so it only made sense for her to follow in her brother’s footsteps and go to college in Athens.

“I actually came to Ohio University thinking I was going to go into print journalism,” said Meyers. “But after my first year, my parents encouraged me to get an internship over the summer. The internship ended up being at a television station, FOX 8 in Cleveland. After that summer, I returned to school and changed my major track to broadcast. I realized that in television you could still write, but you also got to put it with moving pictures. You got to see the story come to life in a way that you couldn’t in print.”

Not long after, Meyers began working at WOUB in the newsroom. She started on the radio, learning about how to put together and anchor a newscast, then worked her way to the television side. 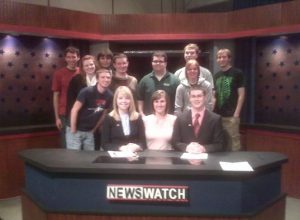 “I started shadowing the TV news producers when my school schedule allowed it and looked for opportunities to learn and grow,” said Meyers. “WOUB and Ohio University were great because you got to try everything. You got to experience it from all angles. There was an interview segment we did on Newswatch every night, and when I anchored the news it made me nervous. But it also challenged me to come out of my comfort zone and helped me understand the business from the shoes of every single position.” 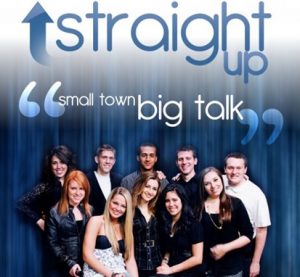 Using the experience she got at WOUB, Meyers was able to get a couple more internships – one at KDKA on Pittsburgh Today Live and at NBCUniversal on TODAY.  When she returned to Athens, Meyers helped launch a lifestyle program called Straight Up.

“I was really interested in producing that kind of program and to be able to try it out while in college was just amazing.”

Meyers graduated in 2010. Prior to joining the PIX11 team, Katie spent six years in Texas as the Executive Producer of both KPRC 2’s “Houston Life” and KSAT 12’s “SA Live.” She’s also produced newscasts at both WJW and WOIO in Cleveland, Ohio, and interned at NBC’s “TODAY” in college.

“It was a huge opportunity, and I jumped at it,” said Meyers. “I wouldn’t be where I am today without WOUB. I’m really grateful to have met the people I met there. It was my first second family and work family. It will always hold a special place in my heart.”