Abigail Dean graduates in May

ATHENS, OH – WOUB Student Abigail Dean will be watching tonight’s NFL Draft with a different perspective. That’s because the Ohio University senior recently learned that she was selected for a year-long paid internship with the Indianapolis Colts. 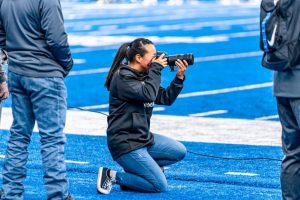 “The internship starts in June, and I’m really excited,” said Dean. “I will be taking photos at games and covering community events. I’ll also help with promotional shoots. I’m thrilled that I will be there a full year and have time to invest in the players and the franchise.”

Dean started working as part of the WOUB Visuals Team during her sophomore year and specializes in sports photography. She has done a lot of work at WOUB supporting the high school sports programming, Gridiron Glory and Hardwood Heroes. Dean also works for Ohio University Athletics.

Dean grew up in Cedar Falls, Iowa and is a fourth generation Bobcat! Her parents met while students in Athens and her grandparents worked for the university. But she is the first in her family to study photojournalism at Ohio University. 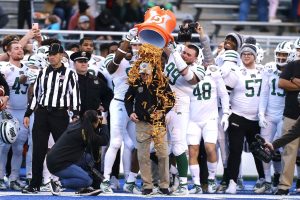 “When I first got to Athens, I thought I wanted to be a photographer for National Geographic and take nature photos,” said Dean. “But as I got opportunities to photograph sports, I just fell in love with it.”

Dean was paired with Former WOUB Student and Current San Francisco Investigative Reporter Brooks Jarosz, BSJ ’09, as part of the new WOUB Mentorship Program. Jarosz worked with Dean on improvements to her resumé, cover letter and website. He’s thrilled she has this wonderful opportunity.

“I’m proud of Abby, her work and her new internship with the Colts,” said Jarosz. “I think it will open a lot of doors for her. I know her passion, drive and talents will make her stand out.”

Dean says she’s not sure who she’s rooting for the Colts to take tonight with the 21st pick in the first round of the draft.

“I’ll be watching tonight for sure and pulling for a few different players,” said Dean. “No matter who they draft, Indianapolis will be an exciting place for me to learn and grow.”

Softball: Bobcats Split A Pair Of Games At Chippewas

Ohio Men’s Basketball: Bobcats Matched With Virginia In First Round Of NCAA Tournament