On Saturday, June 5, the Decorative Arts Center of Ohio in Lancaster will open their first in-person exhibition of 2021: Distinctly Paramount: Fashion and Costume From the Paramount Pictures Archive. The exhibition will be on display through January 2, 2022 and features a wide array of pieces from designers such as Alexander McQueen, Nolan Miller, Edith Head, and many more that have appeared in a variety of Paramount Pictures productions.

The exhibition is curated by Randall Thropp, Manager of Paramount Picture’s Costume and Prop Archive and Lancaster native. Distinctly Paramount marks the fourth exhibition that Thropp has brought all the way from the West coast to the Decorative Arts Center of Ohio.

Between making the final touches on the exhibition, Thropp took the time for a brief Q&A with WOUB Culture. 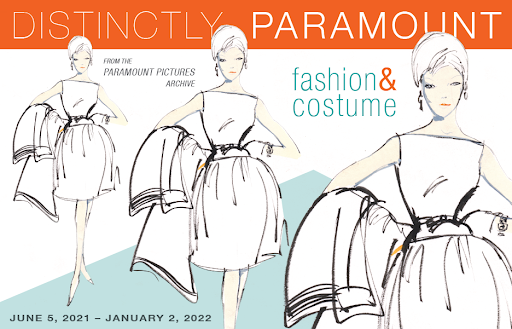 WOUB Culture: What was your curatorial strategy for Distinctly Paramount?

Randall Thropp: Well, I’ve worked on this exhibition now for over a year because its subject is so broad. My big inspiration for it dates back to the beginning of the pandemic, when I purchased a coffee table book called Bill Cunningham: On the Street: Five Decades of Iconic Photography. Bill Cunningham was a photographer who took a lot of candid photos for the New York Times – so the book is kind of like a very early blog of New York street fashion that ran in the paper documenting what people were wearing starting in the late ‘60s. It’s an amazing book. So I was going through it, and I just going ‘wow, this is really interesting – just capturing all these different trends and styles with these totally candid photographs,’ and I realized that I had some great things in the Paramount collection that are not necessarily star pieces, but they were purchased for stars and not used on camera. So, I went to our warehouse and I was thumbing though some of our collection, and I’m finding all these designer pieces, many of which were purchased off the rack, and all of them related to film in some respect.

So, the impetus for the exhibit was to display costumes that are purchased and costumes that are designed and created from scratch – blending high-end fashion pieces with costume design pieces that are made to look like high-end fashion. The oldest piece that will be on display is a lounge pajama created by Travis Banton dating back to around 1928, and the newer pieces are very recent, all the way up to 2019.

WOUB: What does it mean to you to bring this exhibition to your hometown?

RT: Well, this is the fourth one I’ve done, and it’s always fun to bring things to people because let’s face it: a lot of people, especially with COVID and travel restrictions; they’re not going to be coming to Hollywood to see these costumes. So we bring them here.

Also, not to brag or anything, but several of the other exhibitions I have brought to the Decorative Arts Center were picked up by other museums after being displayed at the Decorative Arts Center of Ohio. The Edith Head exhibition I displayed here was picked up by the Bendigo Art Gallery in Australia – they saw it online and decided they wanted to show it there. In fact, the Oklahoma City Museum of Art just recently contacted me because they want to show the Edith Head exhibition that was shown here first. It’s interesting what social media has done for promoting. Without you realizing that you’re actually promoting something, it gets picked up just because people are photographing things and posting them on Facebook or on Instagram.

WOUB: I know we were just talking about how difficult it can be to explain some of these pieces without seeing them in person before our interview, but I was curious: could you tell us about a few of your favorite pieces from the exhibition?

RT: Well, there’s several that I am really enamored of. There’s an Edith Head black gown from about 1936, and it’s just so quintessential ‘30s sexy evening gown. We also have a suit that Veronica Lake wore in the 1942 film The Glass Key, which is a very famous film noir. But then I have pieces like this Alexander McQueen suit from Zoolander 2 – which is really eye-catching, really fantastic. We also have these amazing Victorian pieces – these handcrafted pieces from Budapest, Hungary, that were made for The Alienist – they’re just impeccably done, beautiful pieces of costume.

WOUB: What do you hope people who visit the exhibition come away with?

RT: That’s a good question. I think that I really just want people to appreciate the juxtaposition of work from major fashion designers, like Giorgio Armani, and costume designers, like Edith Head. But, going back to the Bill Cunningham book, what I really want people to think about is how everyone is really costuming themselves all the time. Every day, it’s like you are costuming yourself as if you’re an actor and this is how you are going to dress yourself for the part you are going to play that day. What you’re wearing reflects your personality, your mood, how you want to present yourself. It’s about how you are really your own character, costuming yourself every day. That’s the subtext – but really, what I want people to do, if they can, is to make it out here to see the exhibition in person. I’d say about 80 percent of this exhibition, I’ve never shown anywhere before – and this is the first exhibition that I’ve shown shoes in.