Ohio Poet Laureate Kari Gunter-Seymour will use the $50,000 she received as one of the American Academy of Poets Laureate Fellows selected earlier this month to shine a light on the voices of Central Appalachia by publishing a poetry anthology focusing on the population and its experiences.

Entitled I Thought I Heard a Cardinal Sing: Ohio’s Appalachian Voices, the anthology will be published by Sheila-Na-Gig Editions and will be distributed for free to all 732 Ohio libraries and a free copy to each contributor by March 2022. Thanks to an additional grant from the Foundation for Appalachian Ohio, copies of the anthology will be placed in selected school libraries throughout Appalachian Ohio. The volume will be discounted for schools and non-profits seeking a first-hand source on the Appalachian experience for their curriculums. 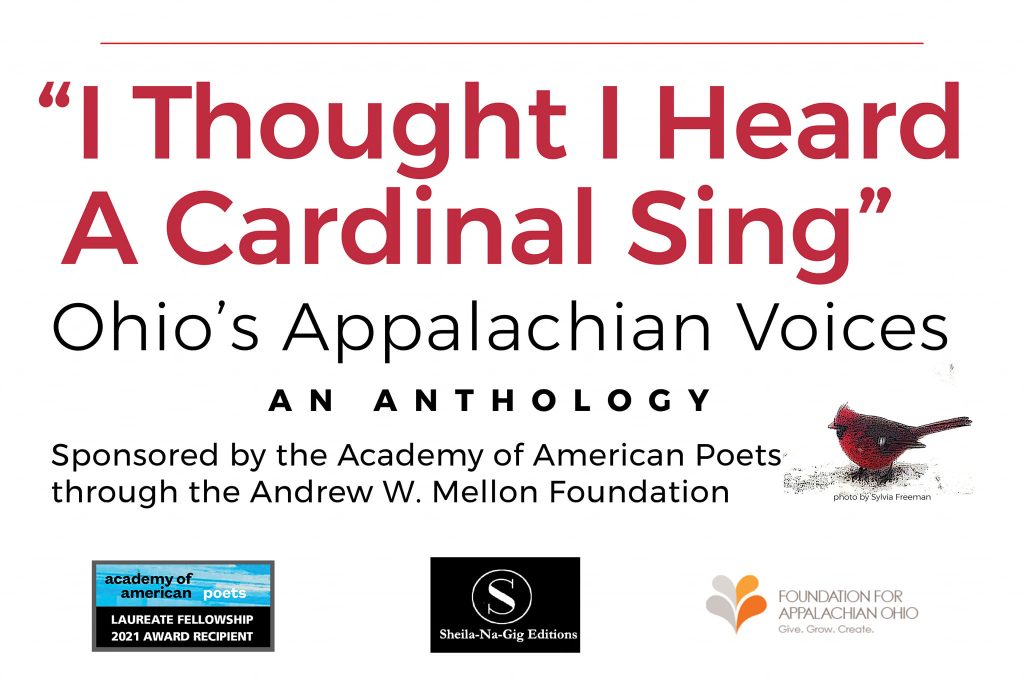 Gunter-Seymour is a ninth generation Appalachian and was named Poet Laureate of Ohio in early 2020, after serving as the Athens Poet Laureate 2018-2020. Her work has been featured in numerous publications, and she is the author of A Place So Deep Inside America It Can’t Be Seen (Sheila-Na-Gig Editions 2020) and Serving (Crisis Chronicles Press 2018). She is also the founder and Executive Director of the Women of Appalachia Project (WOAP).

“So many people, and even people who live in Ohio, don’t seem to know that a quarter of the state is actually a part of Appalachia proper,” said Gunter-Seymour. “For me, I’ve struggled because I am so Appalachian through and through, so far as how I write and how I think and feel and my sense of morality. So it came to me that what I could do to leave a lasting influence perhaps was to make a collection of poems that came directly out of Appalachian Ohio.”

Gunter-Seymour is passionate about dispelling the harmful stereotypes often associated with her community, and I Thought I Heard A Cardinal Sing is a part of that mission.

“The goal is to publish an anthology that is classroom worthy for Appalachian Studies programs, as well as any school system that would like to study a counterculture, which Appalachia is – and one might say it’s a culture which is treated improperly, racially,” she said.

Gunter-Seymour has put out a call for poetry to be considered for inclusion in I Thought I Heard A Cardinal Sing, which can be submitted at this link: https://www.karigunterseymourpoet.com/.

The requirements for submission, outlined on the website, are as follows:

Those who submit poetry to this anthology must have strong ties to Ohio and have Appalachian roots, which include those currently living in Ohio, have lived in Ohio sometime in their lifetime or had relatives/ancestors (cousins, aunts uncles, grandparents) from throughout Appalachia who migrated, live(d) and/or work(ed) in Ohio and have/had amazing stories to tell through poetic form;

OR poems may be written about or in honor of an Ohio Appalachian (friend, neighbor, co-worker or historical figure);

OR poems may be written about Appalachian lore, landmarks and/or the land.

Poets may submit up to 3 poems. At least two poems must be previously unpublished. One poem may be previously published if the poet owns the rights. (Documentation may be required.)

Gunter-Seymour said that those who submit to the project will also be required to write a 100-word first person bio focusing on their connection to Central Appalachia.