The story of a decade-long effort to restore a 200-year-old grist mill in Lancaster, Ohio.

Rock Mill: Saving An Original chronicles a decade long effort to restore a nearly 200-year-old grist mill which many felt was lost to the ages. The largely volunteer project became a symbol of the spirit of a community that believed preservation makes us all better people. Under the direction of the Fairfield County Park District, a small group of talented individuals and many volunteers, realized the cultural significance of the 1824 mill. 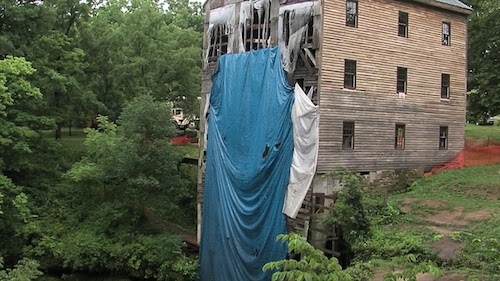 The six-story structure was built on the precipice of a pre-historic gorge, perfectly suited above the upper falls of the Hocking River just north of Lancaster, Ohio. The natural setting drew pioneering entrepreneurs willing to attempt the precarious construction to take advantage of powerful falls. The commercial impact of this single business spurred agricultural development
both near and far. Starting with nothing but an idea, the determination and skill for faithful preservation, mirrored the persistence and ingenuity of the original builders some two centuries before.

Rock Mill: Saving An Original, became the inaugural winner of the Columbus Landmarks Foundation’s Ed Lentz Prize in 2020. The juried competition is held to select the best presentation for providing a better understanding of the history, architecture and/or importance of historic preservation in central Ohio.