Zanesville organizations are partnering for the benefit of artists and small businesses devastated by Jan. 6 Masonic Temple fire

< < Back to
WOUB Digital · Zanesville organizations support artists and small businesses in wake of Jan. 6 fire

Zanesville’s 120-year-old Masonic Temple was destroyed by a fire that broke out around 11 p.m. Thursday, January 6. The seven-story structure was home to about 60 small businesses, studios, and galleries. The cause of the fire has not been determined.

The property, which was added to the National Register of Historic Places in 1990, was iconic to Zanesville and an integral part of Muskingum County’s thriving arts community.

“The arts in Muskingum County are very important, and the loss of the Masonic Temple and the opportunity it provided for so many artists is really going to be felt for quite some time,” said Brian Wagner, CEO of the Muskingum County Community Foundation (MCCF).

MCCF’s Community Cares Fund provides emergency funds to Muskingum County, and currently the fund is focused on collecting donations for the artists impacted by the fire. MCCF has partnered with the Zanesville Appalachian Arts Project (Z.A.A.P) and the Artists Colony of Zanesville (ArtCoz) to collect and distribute the funds.

RoseMary Ludt, Director of Z.A.A.P., said that as of the afternoon of Wednesday, January 12, donations to the MCCF Community Cares Fund totaled around $35,000.

“Galleries and individuals all across the country, from as far away as California, have donated because they heard about this story and the great loss this building was to the artist community, the Masonic organization, and the small businesses who lost so much in the fire,” she said.

Ludt said the Z.A.A.P. gallery, located at 625 Main Street in Zanesville, is currently accepting donations of new or unused art supplies for the impacted artists.

Serenity Holistic Community and other Zanesville area businesses have organized a January 29 “A Day of the Arts” fundraising event for the benefit of the small businesses and artists who lost so much in the Masonic Temple fire. “A Day for the Arts” will take place at the Secrest Auditorium (334 Shinnick St.). in Zanesville and will include a battle of the bands, a silent auction, vendor booths, and more. 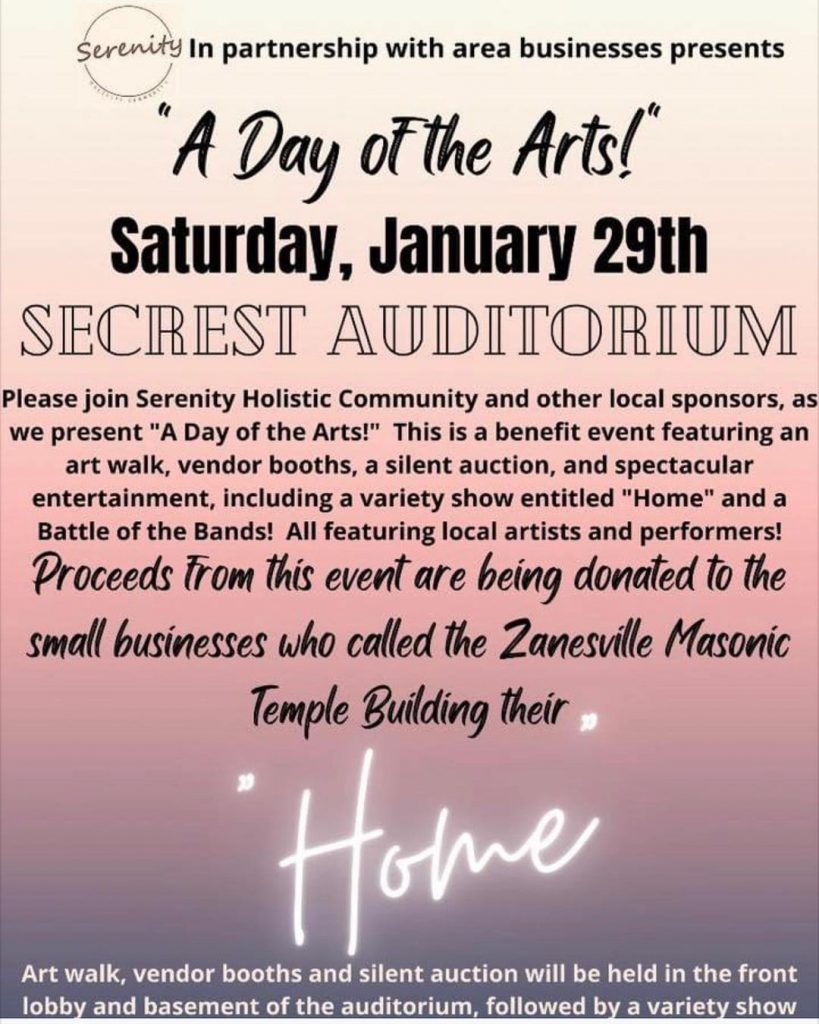 Ludt is hopeful for the arts community in Zanesville given the enormous support it has received over the past week.

“There’s been such a great outpouring of support from the community, those across the state, and even those outside the state,” said Ludt. “It’s really wonderful and heartwarming to see the care that people are giving to our community.”