2022 marks 40 years since Iron Maiden released “The Number of The Beast” – a beastly album, indeed, as its blistering epic songs set a new standard of sophistication for heavy metal; and Iron Maiden’s stage shows were no less dazzling in scope.

“The Number of the Beast” was Iron Maiden’s first album to rocket to number one in their native Great Britain; and it was also Iron Maiden’s first to feature Bruce Dickinson as their singer. Dickinson’s jaw-dropping wails and ear-splitting shrieks were an integral component of the soundtrack that fueled the ire of religious groups that set their records on fire. Literally.

Incredibly, 40 years later, Iron Maiden is more popular than ever. The band’s most recently completed tour, for “The Book of Souls,” played on every continent of Earth… well, besides Antarctica – and let’s face it, their stage show contains way too many pyrotechnics to play there responsibly.

As Iron Maiden played stadiums around the planet, they transported themselves, crew, and stage equipment on a customized Boeing 747, named Ed Force One – a reference to Iron Maiden’s terrifyingly iconic mascot. Amazingly, that jumbo jet is piloted by the band’s aforementioned singer, Bruce Dickinson. Yes; not only do Dickinson’s vocals soar to stratospheric heights of heavy metal – he also commandeers colossal vessels of heavy metal through the actual stratosphere.

Iron Maiden will unleash their “Legacy of the Beast” World Tour in Ohio this October, where they’ll rattle the Nationwide Arena in Columbus.

But first, Bruce Dickinson begins 2022 touring on his own – not just sans band, but without brandishing flame-throwers and lurching beneath mammoth inflatable monsters. Instead, Dickinson will be appearing in intimate theaters, granting audiences not only a coveted close-up of a heavy metal giant; but also allowing them to participate in the presentation – a level of accessibility that is astonishing for an artist of his stature.

“An Evening With Bruce Dickinson” is a speaking engagement, where Bruce will share a bevy of anecdotes from his extraordinary career – the highs, the lows, and peppered with occasional impromptu a cappella performances of Iron Maiden’s operatic compositions. The second half of the show is a free-wheeling marathon of Bruce answering questions submitted by the audience as they arrived at the venue. This improvisational format means that every show on the tour is highly unique. 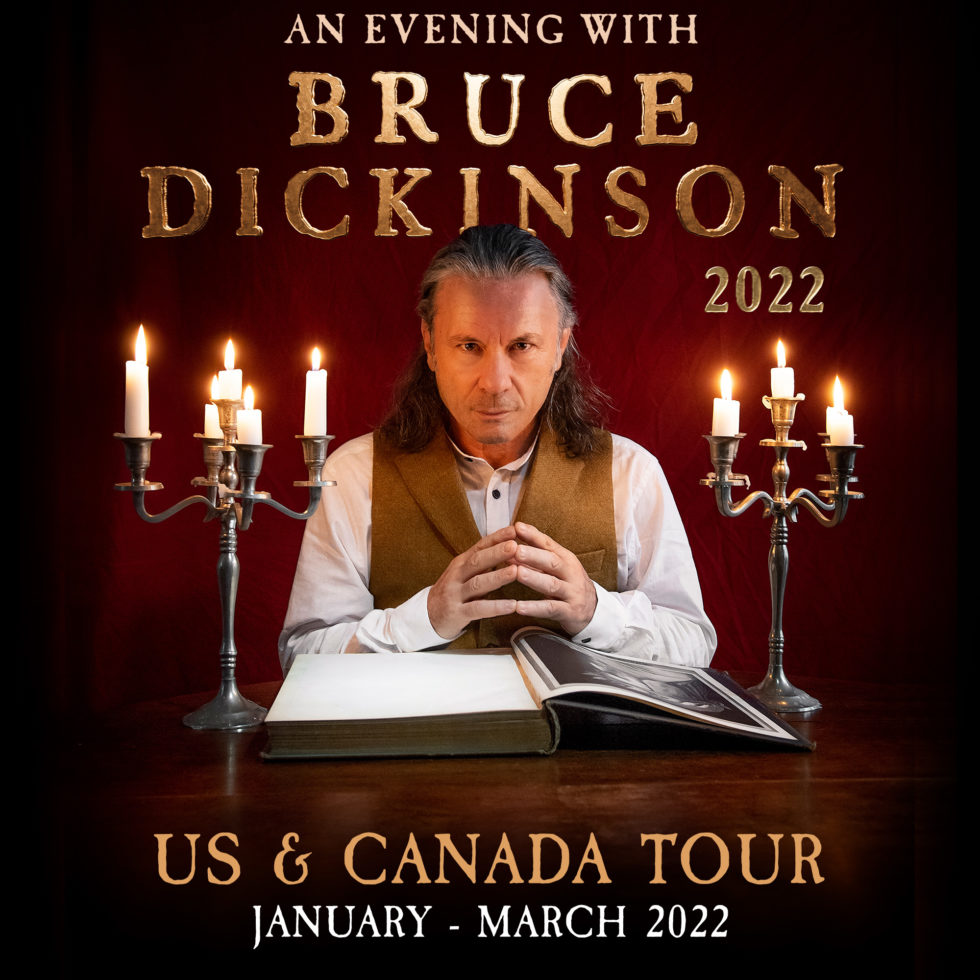 Dickinson visited Ohio to rave reviews at his presentation in the Davidson Theater of Columbus. And on Thursday, February 10, Bruce will return to the Buckeye State for a new engagement at the MGM Northfield in the Cleveland/Akron metroplex.

Despite Dickinson’s breathtaking schedule, WOUB’s Ian Saint was granted the chance to sit down with this heavy metal legend for an exclusive chat ahead of his Ohio return. They covered a wide range of topics, including deeper analysis on Bruce’s widely-reported Columbus show answer about a favorite female vocalist (Ann Wilson of Heart), how a live bat disrupted his show in Florida (of course), why a bare-bones one-man show in a theater makes him more nervous than fronting Iron Maiden’s sold-out stadium shows with hazardous theatrics galore, the experience of making himself vulnerable to an inquisitive audience, the academic impact of Iron Maiden’s epic “Rime of the Ancient Mariner,” and much more!

To hear our entire segment with Bruce Dickinson, click the Play button in the SoundCloud widget beneath the headline. “An Evening With Bruce Dickinson” returns to Ohio with a presentation at the MGM Northfield on Thursday, February 10. Tickets, and a full itinerary of each unique show on Bruce’s speaking tour, can be found on his official website: screamforme.com

How Do We Read? It’s Magic (Almost)

Norah Jones reflects on 20 years of ‘Come Away With Me’