< < Back to
WOUB Digital · Athens’ Peachfuzz celebrates everything glittery, glamorous, and heavy shredding

In fact, it could be said Peachfuzz makes music for people who resist categorization of any kind.

“We are here for the weirdos,” said Peachfuzz guitarist Charlie Miltner. “Like, it’s fine if you’re cool, but it’s better if you’re a weirdo.”

Luka Longanbach, one third of Peachfuzz and a longtime part of the Athens music scene, said Peachfuzz is not so much about genre as it is about expression.

“We wanted a band where it was just like all the instruments are shredding, the whole time. Where it’s a huge sound with a lot happening,” said Longanbach. “We wanted this project to be no holds barred — let’s just go as hard as we can and try and do everything to the extreme.” 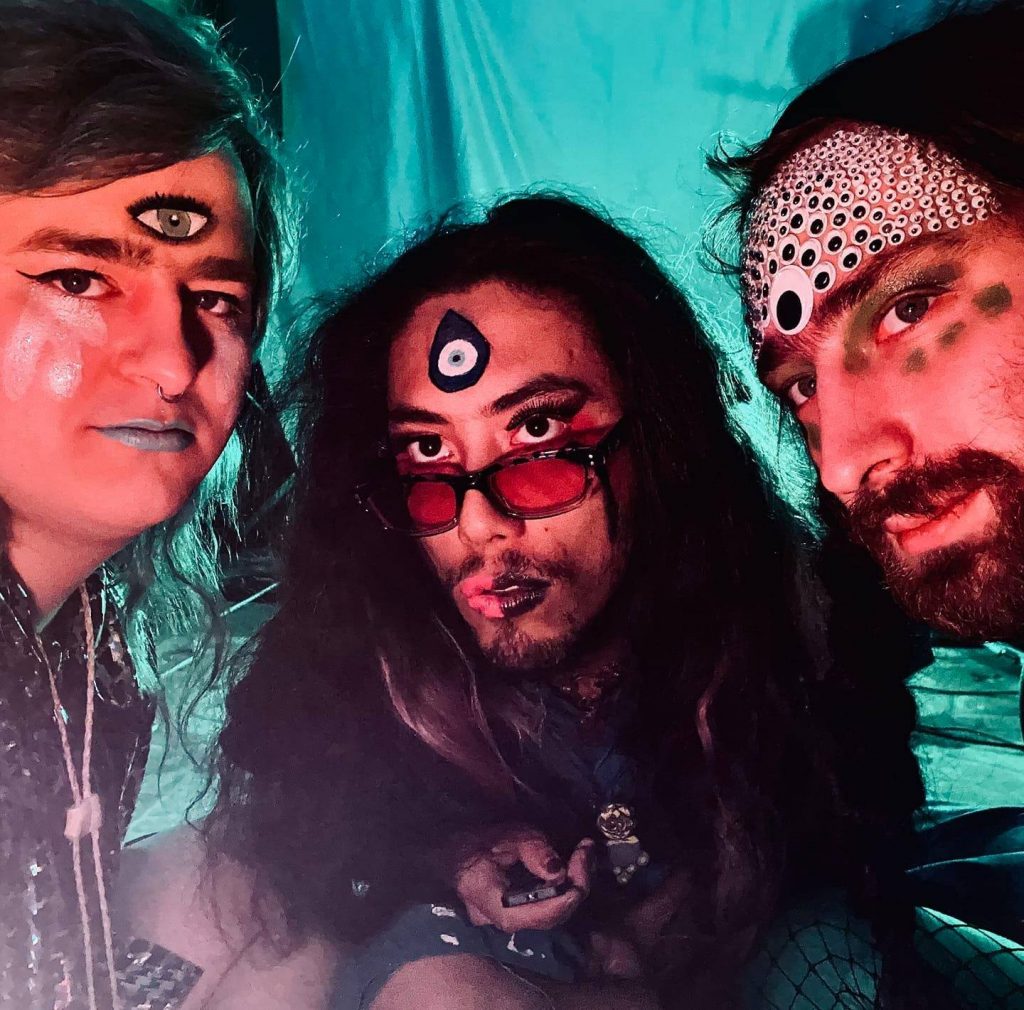 While Charlie and Luka have played together extensively over the years in various Athens-based bands, Peachfuzz is the first project they’ve worked on with bassist Emmett Mashcha.

“(Charlie and Luka) are a little older than me, and I was in college at OU when I first saw them playing Fuzz covers at The Union. And it was like, not only did I know the songs, I already knew how to play them, so I asked if I could sit in on a few rehearsals,” said Mashcha, who was quickly taken on as the band’s bassist.

Peachfuzz’s two full-length releases have been produced by Chris Lude – and the band says that they are particularly proud of their second full-length, “HUGE.”

“We took a lot of time on it and Chris put a lot of his heart and soul into it. Like I know we did, which we’re, you know, we’re proud of it,” said Miltner. “It’s tight that we could have like as many artists on that album that we did have, including Chris (Lude) and Madeline (Jackson, of Dana).”

“We wanted a band where it was just like all the instruments are shredding, the whole time. Where it’s a huge sound with a lot happening. We wanted this project to be no holds barred — let’s just go as hard as we can and try and do everything to the extreme.” – ” Luka Longanbach

Lude’s involvement with Peachfuzz is just one of the many creative collaborations the band has crafted over the course of the past several years. Allowing the artistic visions of others to co-mingle with their own is an integral part of the band. They work with other artists when it comes to lighting their shows, crafting their album artwork, and most recently, producing a music video.

The music video in question was crafted by Jade Downer, for the track “Orgasmnesia.” The world will be given its first glimpse at the nearly 10-minute long opus when it debuts at Peachfuzz’s April 22 show at the amphitheater-like patio of The Smiling Skull (108 Union Street, Athens).

“It’s also a lot of fun to see what other people interpret your art as through their own art. That’s always really fun to see,” said Longanbach.

Peachfuzz has a number of shows coming up, as well as plans for recording a third album in time for a 2023 release. Saturday, April 16, Peachfuzz will perform at The Union (18 West Union Street), sharing the bill with The D-Rays, Tetnis, and Shilpa Ray. Friday, April 22 marks the aforementioned debut of the music video for “Orgasmnesia” at the Skull, as well as a Peachfuzz performance accompanied by sets from Actual Form, Wished Bone, and Vinny Trash.

At each of these shows, Peachfuzz will be selling their enormously original t-shirts – all of which are hand-dyed on shirts the band thrifted. Much like each Peachfuzz composition, and each moment of their live performances, no two shirts are the same.

Keep tabs on Peachfuzz on Facebook, Bandcamp, and Spotify.