Some 66 million years ago an enormous asteroid bludgeoned the Earth, decimating the dinosaurs. Although we have plenty of proof such an asteroid hit the Earth, we’ve been unable to unearth any fossils of dinosaurs killed in the event – until now.

Wednesday, May 11 at 9 p.m. ET, WOUB-TV will broadcast “NOVA: Dinosaur Apocalypse,” a two-part documentary hosted by Sir David Attenborough examining new fossilized evidence recently uncovered at a site in North Dakota which may shed new light on what exactly happened the day that fateful asteroid hit the Earth. 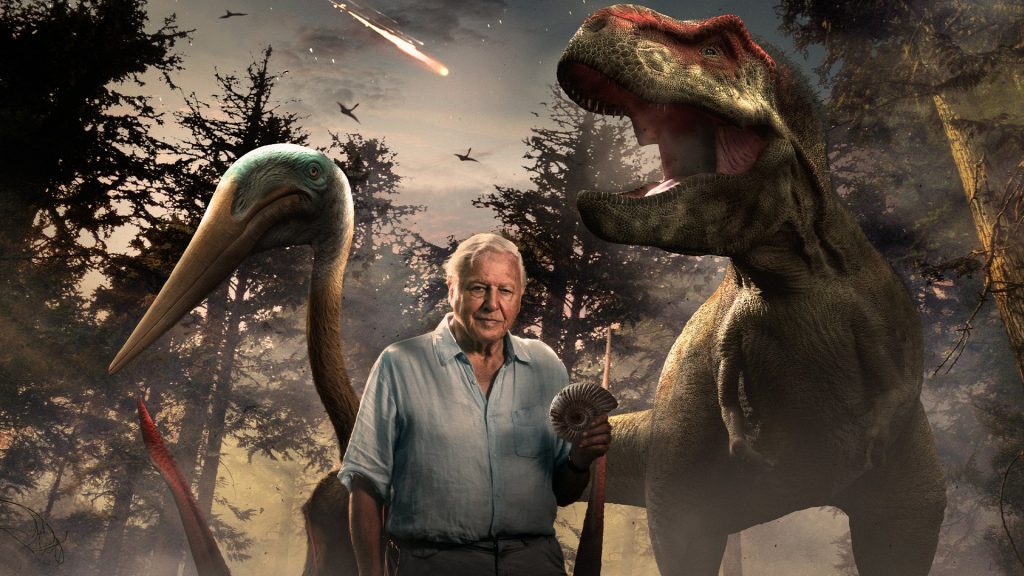 The mysterious extinction of the dinosaurs has always intrigued Dr. Lawrence Witmer, a professor of anatomy at the Ohio University Heritage College of Osteopathic Medicine and an internationally recognized expert in paleontology.

“The thing that sort of continuously excites me about dinosaurs is trying to tease apart how they worked, looking not just at the bones of dinosaurs, but also at the biology of their modern day relatives, since dinosaur fossils can’t really speak for themselves to tell us how they worked,” said Witmer, whose lab has recently received a major grant to fund further research into the intelligence, cognitive abilities, and sensory capabilities of dinosaurs.

Witmer said it took us quite a while to determine that it was an enormous asteroid which took out the enormous, fierce creatures whose remains we still find in fossilized form today. He said over the course of the past 30 years we’ve further refined that knowledge – discovering the asteroid hit what is the modern-day Yucatan Peninsula in Mexico.

“If you can imagine an asteroid that is larger than Mount Everest hitting the Earth – that’s going to be a pretty big splash,” he said.

Witmer said that while there is evidence of massive fires immediately after the asteroid’s collision with Earth, even more destruction was caused by debris kicked up by the asteroid’s impact. That dust ultimately blocked the sun for a period of time, making it impossible for plants to properly photosynthesize – leading to the collapse of entire ecosystems and a dramatic cooling period that has often been compared to the concept of a nuclear winter.

While we know all this, Witmer said “NOVA: Dinosaur Apocalypse” is particularly exciting because of the new information it contributes to our understanding of this extinction event.

“Over the course of the past two or three decades, we’ve developed pretty refined knowledge about what happened 66 million years ago when this asteroid hit — we actually know where it hit, we know some of the effects afterwards, but what we never expected to find is the subject of this television show hosted by David Attenborough — we never expected to find evidence of the day the dinosaurs died. Actual evidence of the literal hours after the asteroid hit,” said Witmer, who said “NOVA: Dinosaur Apocalypse” essentially examines in detail findings initially published around 2019.

If the extinction event that led to the end of the dinosaurs sounds horrific, that’s because it was. However, Witmer explained that without it, human life as we know it likely wouldn’t exist.

“So, one of the things about mass extinctions is that they’re horrific cataclysms for the animals on the Earth at the time, but in a sense, they provide resets for life to evolve. They sort of reshuffle the cards and new things can emerge as a result. So mammals, our ancestors, had been around throughout most of the age of dinosaurs – but they were just tiny things, just sort of hanging out and never taking a major foothold,” said Witmer. “That is, until the extinction of the non-avian dinosaurs 66 million years ago. To a certain extent, that reset button, that reshuffling of the cards at the end of the age of dinosaurs is one of the things that allows humanity to evolve.”

Why is it so important to study and understand the extinction of the dinosaurs? As it turns out, Witmer explained, we are currently in the midst of another mass extinction event.

“And the kicker is, we’re the darn asteroid! Human activity is leading to this potentially mass extinction that we are in the midst of right now. We are seeing massive changes in our planet due to the industrialization of our societies. It’s global. It’s not just us, as Americans – it’s been happening for quite some time, but we are just starting to see the effects of our own activity,” said Witmer.

While we are on the fast track to causing our own mass extinction – Witmer said one thing we can be sure of is that the Earth will survive, whether or not there are humans surviving to inhabit it.

“One of the many things we learn from studying these mass extinctions is that while serious damage can be inflicted on the Earth, we can’t really wreck it. The Earth has endured some major trauma, but one of the things that comes out of that trauma is innovation – new things emerge, new animals, and new ways to solve life’s various problems,” he said. “One of the joys of being a paleontologist is being able to explore this vision of deep time, to explore how out of all of these various tragedies life emerges like a phoenix from the ashes. I find it offensive, what we are doing to the planet – and to think that we are basically the equivalent of an asteroid that is the size of Mount Everest – that should be very jarring to people. The difference between us and the asteroid is that we potentially have the ability to change that destiny – to see the errors of our ways, and respond.”

Want Daring Or Calming? Great Outdoors Has Both