You are viewing the "Zoe Stitzer" Archives 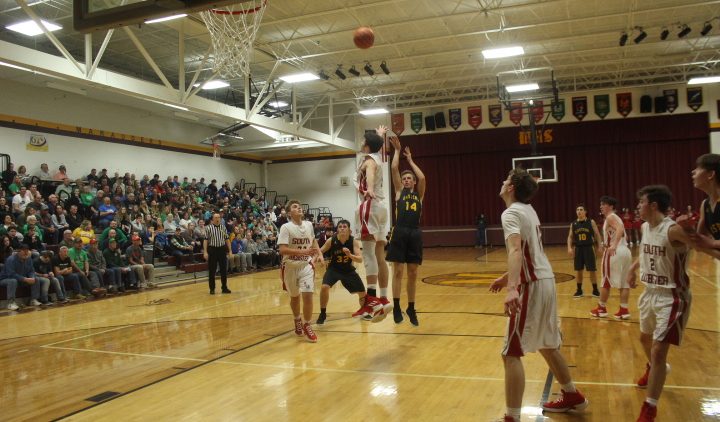 Eastern got off to a slow start – an uncommon theme for this team. Garrett Barringer scored all four points for Eastern in the first quarter. After only scoring one basket from the field in the first quarter, they didn’t shoot much better in the second quarter. Eastern’s offense was fluid. The Eagles moved the… Read More

The district semifinals game was played on the court, but won in the paint.  Clay came out strong in the first quarter, matching Eastern point-for-point. Clay’s dedication to getting the offensive rebound gave the team many more quick shot attempts than Eastern. Eastern beat Clay at their own game later in the game by taking… Read More

Eastern’s seniors were welcomed with a sweet send off, a packed house, and a storied rivalry, but they couldn’t say their goodbyes with a win. Eastern didn’t give up after their twelve point deficit in the third quarter. They came into the last quarter of the game with an urgency felt by the whole team… Read More

Trimble played fearless during the first half. They moved the ball, drove to the basket whenever they got the chance and even when they didn’t score, they drew the foul. South Gallia got off to a slow start early on and was plagued by foul trouble throughout the game. This would greatly benefit Trimble and… Read More

Midway through the third, Eastern was down by two points when sophomore starter Ashton Guthrie had a breakaway 3-pointer that tied the game. Eastern, who had been trailing Belpre consistently all game, rejoined the game with a new intensity, immediately stole the ball, and gave it to Guthrie who sunk another three. In 30 seconds,… Read More

Pickaway County residents approved the 0.5 mill park district levy, with 5,765 votes supporting the measure and 4,581 against. Circleville residents voted in favor of the proposed ordinance by 2,132 votes to 473 votes. The Village of New Holland residents did not renew the 1.5-mill current expenses levy with 42 votes for the levy and… Read More