The Bobcats cruised to a 24-13 victory over the Buffalo Bulls on Sunday, and completed a weekend sweep of two Mid-American Conference duals

No. 8 Tywan Claxton, 149 pounds, and Sparty Chino, 157, got the match rolling in the Bobcats favor with two major decisions to open the dual. 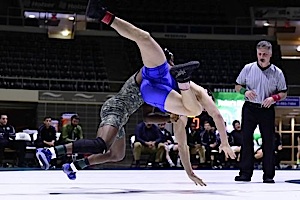 Claxton left no doubts in the opening match, as he dominated Buffalo’s Justin Cooksey in a 14-1 major decision. Chino kept it up with a 14-5 major decision against Danny Graham.

Harrison Hightower wore out his opponent at 165 for a 7-0 win. The senior Bobcat racked up more than four minutes of riding time.

The first close match of the day came at 174. No. 8 Cody Walters and Wally Maziarz wrestled a scoreless match into the third period. Walters managed an escape with 1:30 left and won a 2-0 decision for the Bobcats.

Ohio’s Andrew Romanchik continued his success at 184 pounds with an 8-2 victory. He extended his record to 11-3 since making the weight-class jump from 157 pounds, all while still weighing in around 175 pounds.

“Can’t say enough,” head coach Joel Greenlee said about Romanchik’s success. “He goes out there and figures out a way to win against every guy. I think he could easily be 3-11, too, but he’s a competitor. He goes out there, wrestles hard and good things happen.”

After three-straight victories by decision, 197-pounder and 16th-ranked Phil Wellington picked up some more bonus points for Ohio with a 16-6 decision. 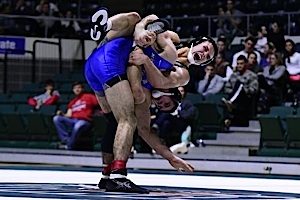 In a matchup of freshman heavyweights, Jesse Webb effectively clinched the win for the ‘Cats with a 3-2 win.

Despite the 24-0 deficit, the Bulls finished the match strong with three straight victories.

125-pounder Max Soria put up the first points for Buffalo with a decision over Zak Hassan. Josh Parrett surrendered a major decision to Sean Peacock in the 133-pound matchup, and Colt Cotton pinned Joel Shump at 141.

“Those are guys that I think can be great college wrestlers but it just might not be this year,” Greenlee said. “A lot of those guys we weren’t necessarily planning on being our varsity guys, just a couple of people in front of them got hurt, but I think each one of them is showing signs of being really good at different times.”

After starting 0-3 in the MAC, Ohio’s conference record is now even. The Bobcats seem to be hitting their stride at the right time and Greenlee likes what he saw on Sunday, as he felt his winning wrestlers dominated from start to finish for the first time all season.

Up next for Ohio is a trip to Old Dominion on Jan. 30.

Ohio Runs Away With Match Against Buffalo