ATHENS, Ohio — Mount Zion Baptist Church on West Carpenter Street in Athens, Ohio, is now under the control of the Ohio Attorney General.  The locks  were changed Monday afternoon on the doors of the church, which had been a place of worship for nearly a century.

Kate Hanson, public information officer at the Ohio Attorney General’s Office, said an investigator was sent to the church on Monday to ensure that the building was secured.  The locks were then changed on all of the doors and a key was given to the investigator.

The decision to send an investigator came as the result of a ruling from the Athens Common Pleas Court on March 16.

“It all started as a charitable-laws issue with the church and who it belonged too,” Hanson said. “Finally, the judge issued a default judgment against the defendant.”

Ron Luce of the Mount Zion Baptist Church Preservation Society accompanied the investigator in the walk-through. Luce, former executive officer of the Athens County Historical Society, has been working over the last four years to preserve the historical value of the church and its importance to the surrounding Athens community.

“It was just sitting there empty; it has great historical value,” he said. “A great deal of black history in this area has not been told, has not been preserved, and we wanted to make sure that building was preserved.” 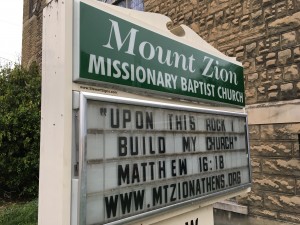 The land the church sits on was donated by Edward C. Berry, a well-known African-American businessman in Athens in the early 1900s. Berry owned the famous Berry Hotel on Court Street.  Luce said he believes the link between Mount Zion Baptist Church and Berry’s legacy is also important to the history of Athens.

“What we want to do is make sure that the community doesn’t lose sight of the contributions of African-Americans in Southeastern Ohio,” Luce said.

The church has not hosted an active congregation in 17 years, and the last known service inside the building was a funeral in 2006.  Despite the lack of usage and its dilapidating structure, Luce said has high hopes for the building and what it could mean to this community in the future.

“It’s one of the few pieces of black history that we can look at and touch, and eventually; hopefully, people will be able to go into.”

It is unclear what will become of the church.  But for now, the Ohio Attorney General’s office is in control of the building and its assets, and will eventually decide who will take control of the historic structure.

Many Church Services Canceled Because of Snow

ARTS/West May Be Temporary Home For Church Relocation