When President Trump picked the Ohio Valley as the setting to promote his infrastructure plan, he also drew attention to an overlooked part of the nation’s transportation system: inland waterways. Agriculture, energy, and manufacturing interests all depend heavily on the Ohio’s aging navigation system.

The president’s speech in Cincinnati cheered many industry leaders who have long been frustrated by costly delays caused by failing locks and dams on the river. But some of the Trump administration’s ideas for changing how the country plans and pays for waterways projects have raised concerns among infrastructure experts.

In western Kentucky, not far from where the Ohio joins the Mississippi, work is underway on the most expensive inland waterway project in U.S. history. The Olmsted Locks and Dam will replace two aging structures upstream where breakdowns create a bottleneck on the flow of barges. Army Corps of Engineers Colonel Christopher Beck said Olmsted is one of the busiest locations on the inland waterways.

“We pass about 90 million tons of cargo through here every year. So it’s critical to both this region, to industry and the nation,” Beck said.

By the time it’s complete in 2022 the project will be nearly 30 years in the making and with a total price tag of a little under $3 billion.

President Trump wants to change how the country goes about building big projects like Olmsted, with fewer regulatory restrictions on the permitting process and more private capital investment in place of federal tax dollars.

About 500 miles upstream of Olmsted Trump stood on the Ohio’s banks in Cincinnati to speak about the nation’s infrastructure. With coal barges as a backdrop, the president said businesses and jobs depend on infrastructure that is in dire condition.

“These critical corridors of commerce depend on a dilapidated system of locks and dams that is more than half a century old,” Trump said. “And their condition, as you know better than anybody, is in very, very bad shape. It continues to decay.”

Mike Toohey was excited to hear President Trump talking about the river system. Toohey is President of the Waterways Council, an organization advocating for inland waterways infrastructure.

“It’s the first time in my career that I’ve heard a president talk about the need to invest in our waterways and how important they are to our national economy,” Toohey said.

The president’s speech was light on specifics and the administration has not yet delivered any detailed infrastructure plan. But a White House fact sheet outlined plans for “establishing a fee to increase the amount paid by commercial navigation users of inland waterways.”

Toohey is a bit skeptical of this approach, especially if tolling is implemented. He said waterway users already contribute to the costs of building river infrastructure through a tax on diesel fuel that goes to the Inland Waterways Trust Fund. Toohey warned that increased fees could drive commerce away from waterways and toward rails and highways, disrupting long term business decisions based on affordable river transport of goods.

“Customers will exercise their choice to always pursue the low cost option,” he said. “They will go to competitors of those businesses that are on the waterways, because they don’t have to pay any tolls and they’ll buy their commodities there.” 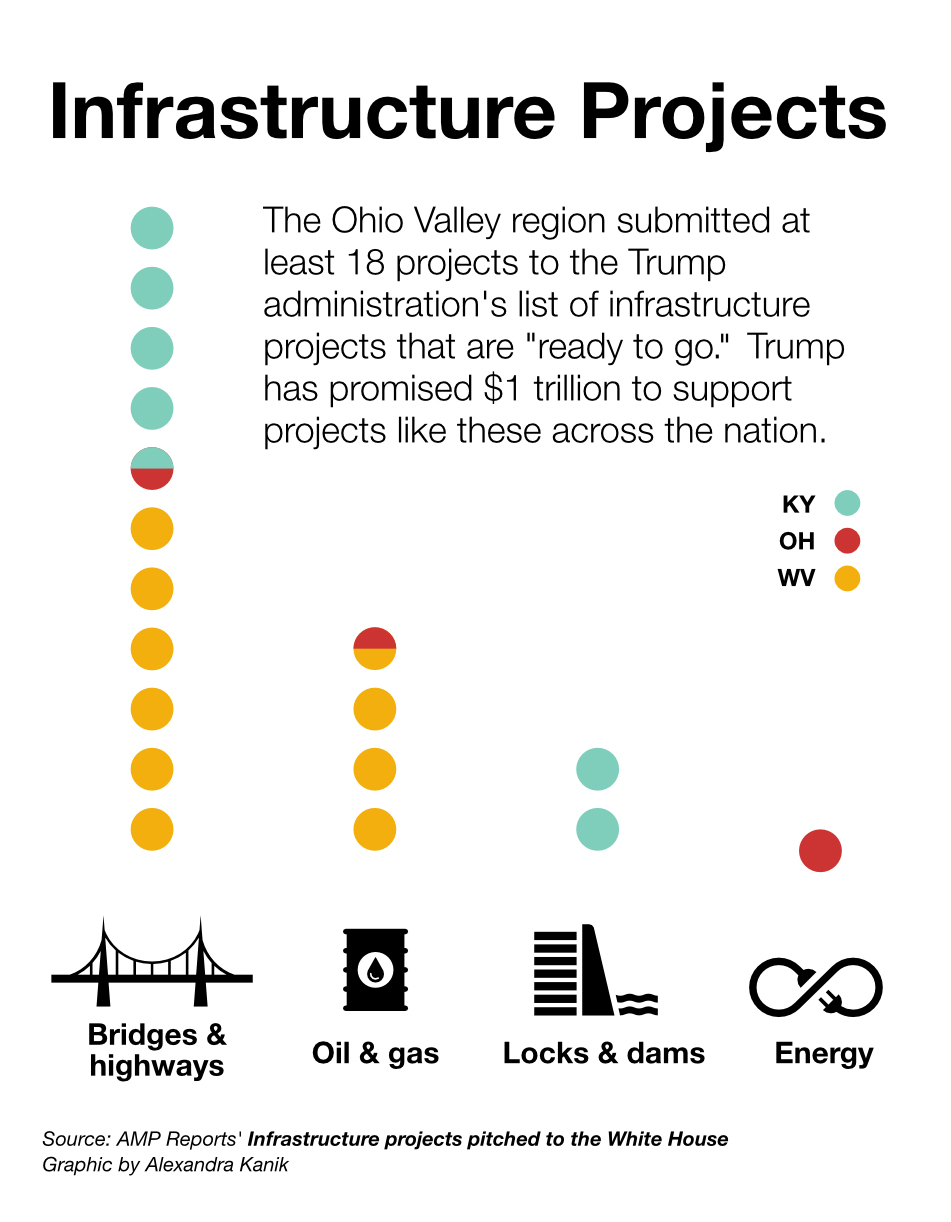 “The private sector can provide valuable benefits for the delivery of infrastructure,” according to the document, which promoted public-private partnerships as a way to “help advance the nation’s most important, regionally significant projects.”

Public-private partnerships, sometimes called P3s, are not widely used for infrastructure funding in the U.S. and have a mixed record when they are.

Steve Ellis, vice president of the non-profit budget watchdog group Taxpayers for Common Sense, said private sector interests don’t always line up with public needs. He said there is an inherent tension between the private sector’s desire to get a return on investment and the public’s desire to keep services affordable, and warns that P3s carry risks for the public.

“You know, a large percentage of them actually fail,” Ellis said. “And then the federal taxpayer or the state taxpayer in many of these cases is on the hook to actually fund the rest of the project or pick up the pieces where they left off.”

Rollbacks on the River

Trump also pledged to roll back regulations associated with the permitting of infrastructure projects.

“We’re getting rid of the regulations and we’re massively streamlining the permitting and approvals process,” Trump said in his speech in Cincinnati.

A White House web page on infrastructure sets a goal to “dramatically reduce permitting time for these infrastructure projects from 10 years to 2 years…by slashing regulations.”

But taxpayer watchdog Ellis warned that those regulations can play an important role in making sure tax dollars are spent wisely.

“Sometimes some of those regulations and hoops lead to us not building a bad project or wasting taxpayer money,” Ellis said.

Ellis called Olmsted the “poster child” of overdue and over-budget projects — one that should serve as a cautionary tale. He and others will be watching to see if those lessons are heeded as the president pushes for $1 trillion in infrastructure investment.

A recent report card from the American Society of Civil Engineers gave the country’s infrastructure a near failing grade of “D+” for shortcomings in water, transport, and public safety. The Ohio Valley is no exception, where the ASCE identified billions of dollars in needed investment in drinking water and wastewater systems, improvements to structurally deficient bridges, and numerous high-hazard dams.

The graphics below are based on the ASCE report on infrastructure in Kentucky, Ohio, and West Virginia. 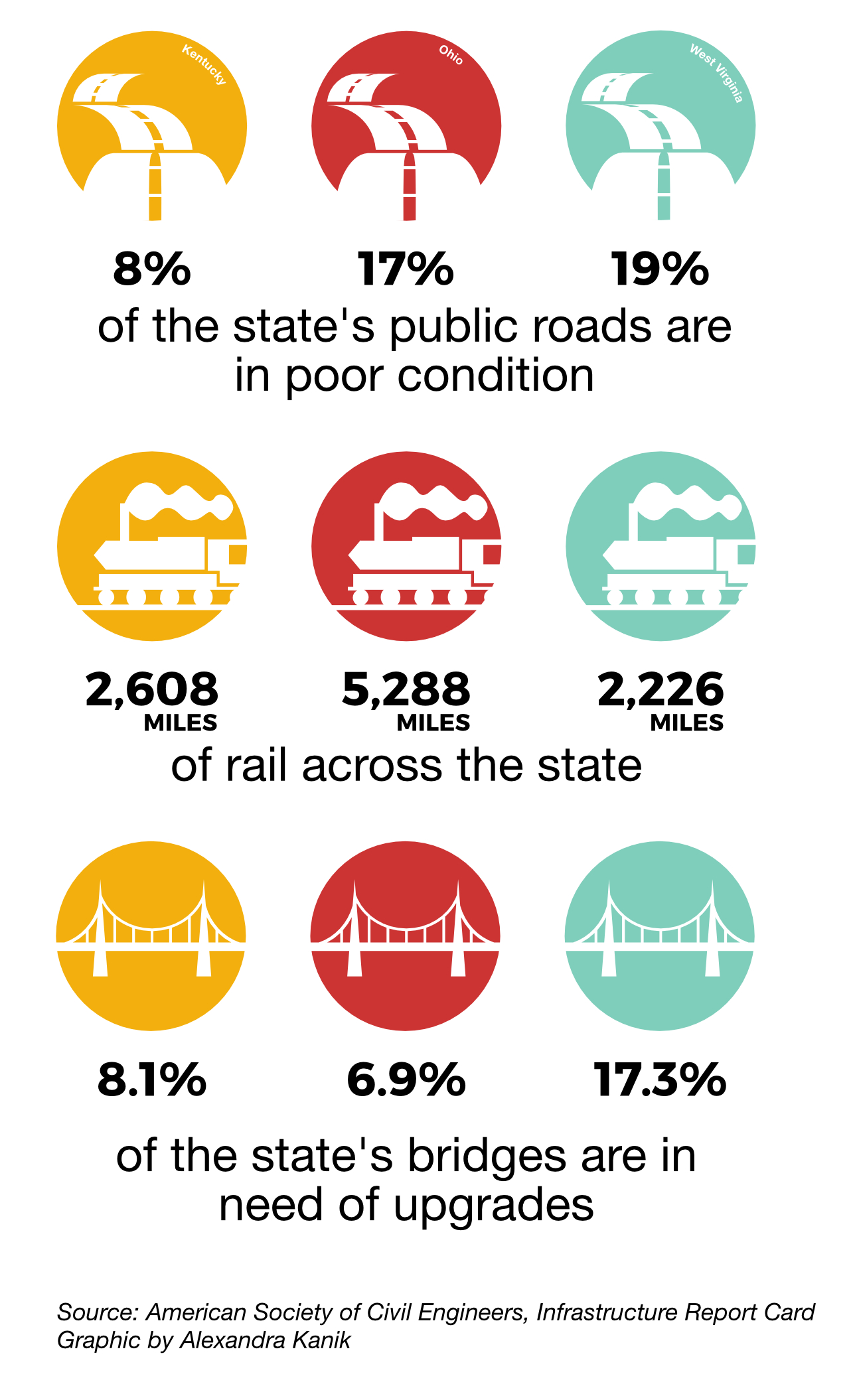 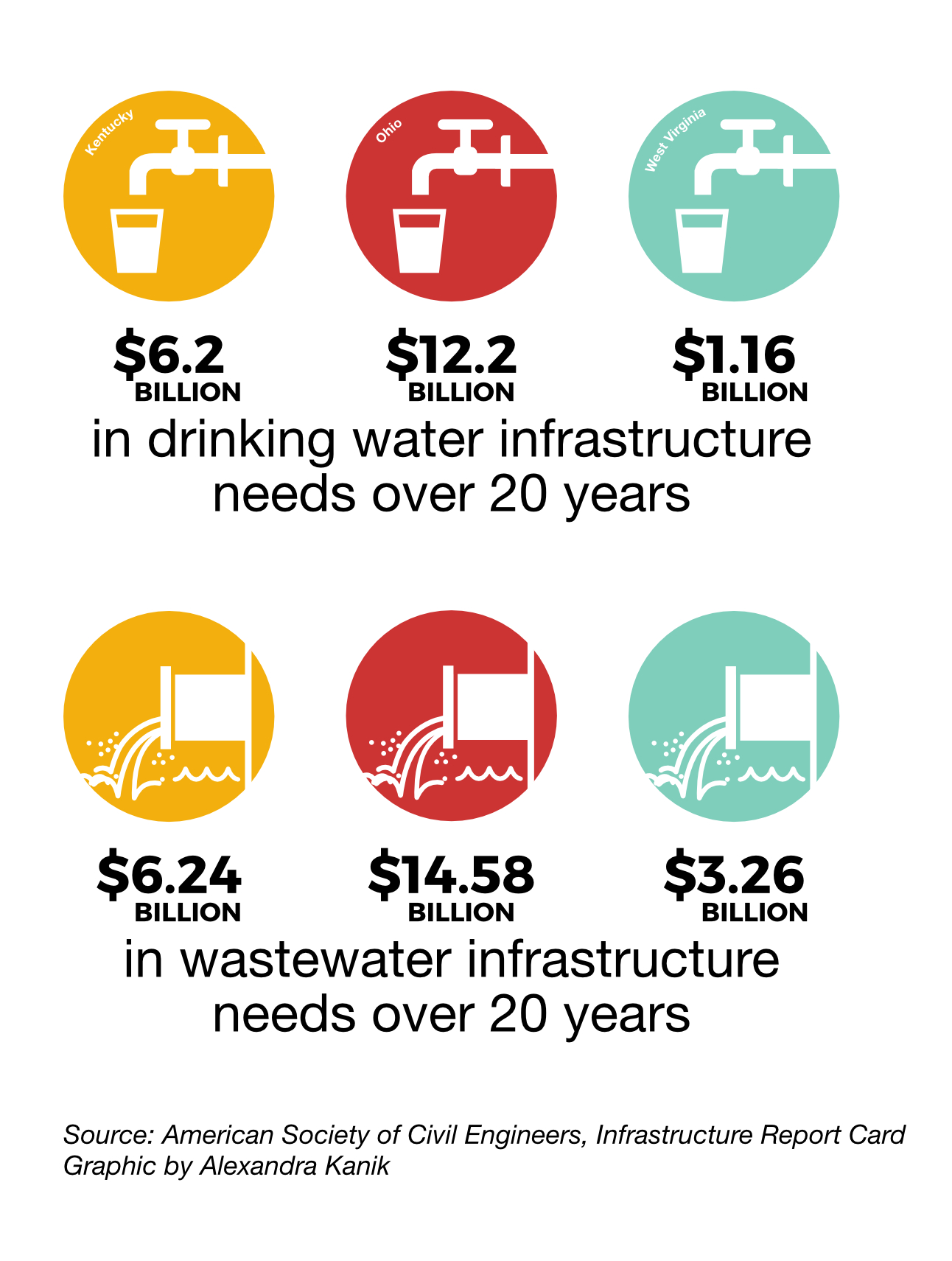 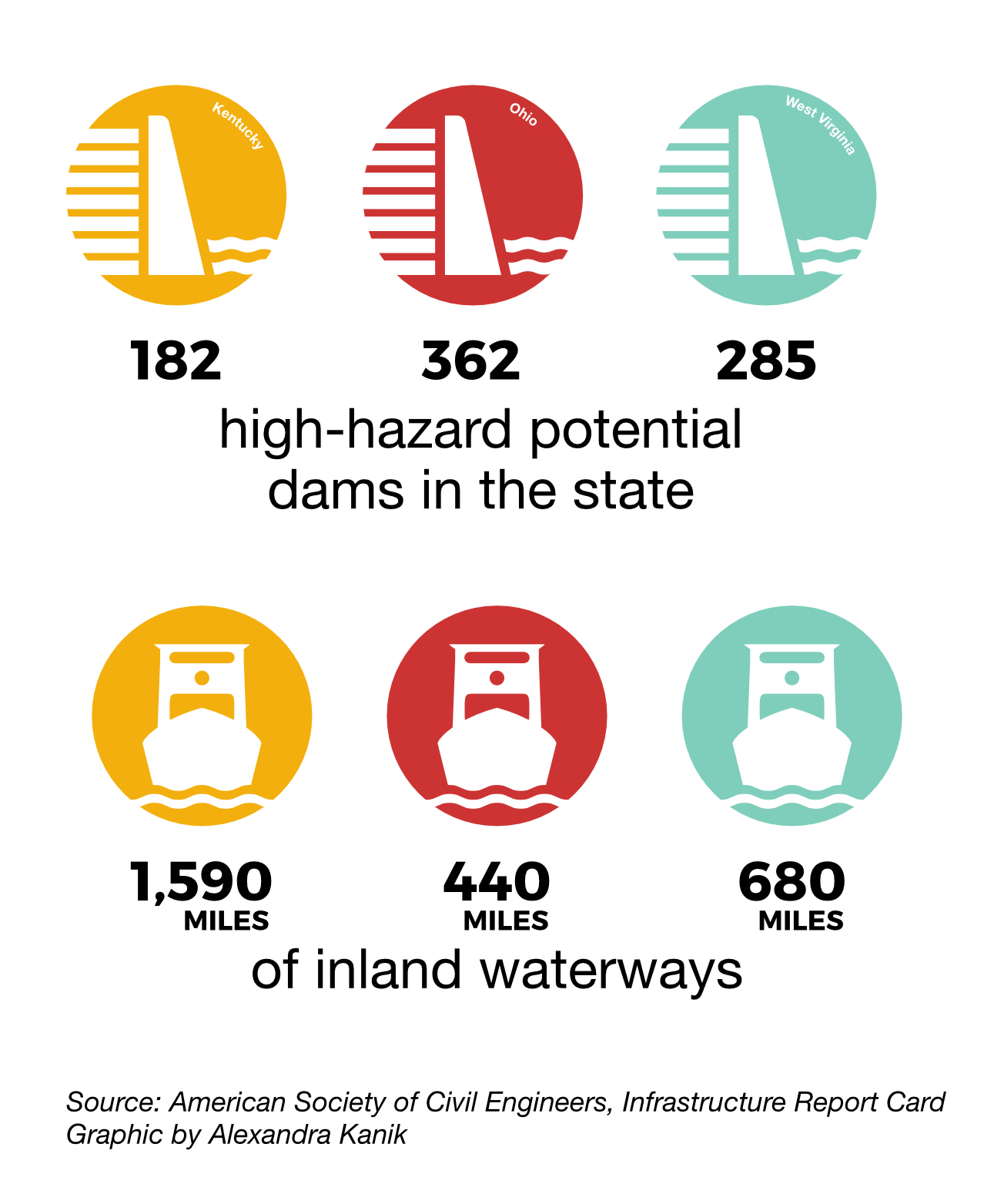 River Cleanups Are This Weekend in 6 States Along Ohio River