A Lyrical Portrait of the Writer, Poet, Farmer and Environmental Activist

Look & See: Wendell Berry’s Kentucky is a cinematic portrait of the changing landscapes and shifting values of rural America in an era of industrial agriculture, as seen through the mind’s eye of writer, farmer, and activist Wendell Berry. Through his poetic and prescient words and the testimonies of his family and neighbors — all deeply affected by the industrial and economic changes to their agrarian way of life — we see the changing landscapes of rural America and the redemptive beauty in taking the unworn path. Often called “a prophet for rural America,” Berry has long been a voice for communities frequently overlooked by the media. Directed by Laura Dunn and executive produced by Terrence Malick and Robert Redford, Look & See: Wendell Berry’s Kentucky premieres on Independent Lens Monday, April 23, 2018, 10:00-11:00 PM on WOUB. 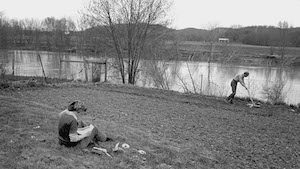 In 1965, after living in California, Europe and New York, Wendell Berry returned home to Henry County, bought a small farmhouse and began a life of farming, writing, and teaching. This lifelong relationship with the land and community would come to form the core of his prolific writings. A half century later, Henry County — like many rural communities across America — has become a place of quiet ideological struggle. In the span of a generation, the agrarian virtues of simplicity, land stewardship, sustainable farming, local economies, and rootedness to place have been replaced by a capital-intensive model of industrial agriculture characterized by machine labor, chemical fertilizers, soil erosion, and debt — all of which have frayed the fabric of rural communities. Writing from a long wooden desk beneath a forty-paned window overlooking the land, Berry has watched this struggle unfold, becoming one the most passionate and eloquent voices in defense of agrarian life.

Filmed across four seasons in the farming cycle, Look & See: Wendell Berry’s Kentucky combines observational scenes of farming life and interviews with farmers and community members with lyrical and evocative shots of the surrounding landscape. Thus, in the spirit of Berry’s agrarian philosophy, Henry County itself emerges as a character in the film, a place and a landscape that is deeply interdependent with the people that inhabit it. 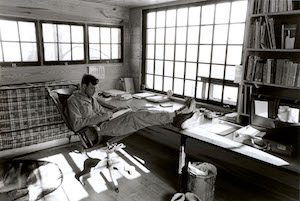 The author of more than 40 works of fiction, nonfiction, and poetry, Wendell Berry has been the recipient of numerous awards and honors, including a Guggenheim Foundation Fellowship (1962), the Vachel Lindsay Prize for Poetry (1962), a Rockefeller Foundation Fellowship (1965), a National Institute of Arts and Letters award for writing (1971), the Emily Clark Balch Prize from The Virginia Quarterly Review (1974), the American Academy of Arts and Letters Jean Stein Award (1987), a Lannan Foundation Award for Non-Fiction (1989), membership in the Fellowship of Southern Writers (1991), the Ingersoll Foundation’s T. S. Eliot Award (1994), the John Hay Award (1997), the Lyndhurst Prize (1997), and the Aitken-Taylor Award for Poetry from The Sewanee Review (1998). His books include the novel Hannah Coulter (2004), the essay collections Citizenship Papers (2005) and The Way of Ignorance (2006), and Given: Poems (2005), all available from Counterpoint. Berry’s latest works include The Mad Farmer Poems (2008) and Whitefoot (2009). In 2015 he became the first living writer named to the Kentucky Writers Hall of Fame.

Berry lives and works with his wife, Tanya Berry, on their farm in Port Royal, Kentucky.