On a cool but clear November day about a dozen residents from eastern Kentucky’s coal mining region crowded into the lobby of an office building in the small town of London, Kentucky. That’s where Kentucky’s powerful senior senator, Mitch McConnell, has his local field office.

McConnell’s staff let the local advocates for black lung treatment into the office a few at a time to make their case for funding the federal Black Lung Disability Trust Fund.

There was a lot of laughter and plenty of selfies, but there was tension, too. Many of these residents know miners and families affected by the deadly disease who depend on benefits from the fund, and they know the clock is ticking on a tax that has supported the fund for more than 35 years.

Some people quietly rehearsed what they hoped to say; others brought written statements to read to the senator’s staff.

“I have lived in Appalachia almost 40 years,” Virginia Meagher read aloud. Her first job out of law school was helping disabled miners get approved for black lung benefits. “As our society makes the transition to clean energy we should not forget how our coal miners provided the foundation.”

Another resident, Morgan Brown, said she was visiting McConnell’s office on behalf of her father, a retired coal miner suffering from black lung. Brown said her father worked for different coal companies across the state. Now he struggles with the disease and fights to get benefits from the industry. 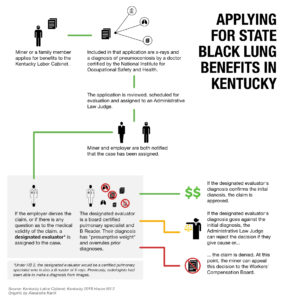 “You thought these were your employers, they cared about you,” she said. “Just to see them fight so hard against him is just, like I said it’s infuriating. You just really feel anger.”

Brown’s father is seeking benefits from a company he worked for. But more than 25,000 miners and their dependents rely on the federal trust fund for benefits because a responsible employer cannot be identified.

An excise tax on each ton of coal mined supports the fund, but early in the fund’s operation it slid deep into debt. Congress roughly doubled the coal tax in 1981, and renewed that rate ten years ago.

That rate expires at the end of the year, which would send the tax back to its 1980 level. That would save money for the mining industry but would likely sending the fund’s debt spiraling billions of dollars higher unless Congress acts to extend the existing tax rate.

Retired miner Carl Shoupe said if anyone can get Congress to act, it’s his state’s senior senator.

“Senator McConnell, he’s the most powerful senator in, in the world, as far as that goes. And if he gets on this, he can push it through. I believe that,” Shoupe said. “And I hate to put that on him, but it’s the truth, you know?”

The fate of the trust fund is unfolding amid an epidemic surge in cases of black lung disease among Appalachian miners and a sharp downturn in the region’s mining industry. That leaves McConnell in an uncomfortable position that pits the interests of powerful home-state mining companies against those sickened by work in that industry.

As Majority Leader, Sen. McConnell could find a way to extend the tax. During an October event in eastern Kentucky he appeared to indicate he would do that.

“That’ll be taken care of before we get into an expiration situation,” McConnell said in response to a ReSource reporter’s question about the status of the trust fund and the coal tax. “It just won’t be allowed to be unfunded,” McConnell reiterated.

But with less than a week remaining in the Congressional session, black lung advocates are still waiting for McConnell to follow through on that, and McConnell’s staff appears to be softening the senator’s earlier statement.

McConnell’s office did not answer detailed questions about the fate of the tax or commit to extending it at its current rate. In a written statement to the ReSource, McConnell said, “It is a top priority of mine to maintain and protect benefits for those suffering from black lung disease.”

As the ReSource reported in June, a report from the Government Accountability Office estimates that a reduced coal tax would likely add billions to the already sizable debt for the trust fund. In one scenario, the GAO estimates a $15 billion debt for the fund by 2050.

That would not immediately put miners’ benefits in jeopardy. In the past the federal government has forgiven the fund’s debt. But advocates say a large debt raises the possibility of reduced benefits down the road or greater barriers for future applicants to win benefits. And they raise questions about the fairness of having taxpayers, rather than the industry, paying off the fund’s debt.

The United Mine Workers of America, the union representing miners, argues that allowing the coal tax rate to expire would shift the burden for black lung benefits from the industry to the public.

“At a time when black lung is on the rise, especially among younger miners, Congress should not be even considering allowing the coal industry contribution to be cut,” UMWA President Cecil Roberts said in a statement. “Miners are going to need these benefits for decades to come. This is a problem that has been created by the coal industry, there is a system to help the victims of this disease already in place that the coal industry pays for, and I see no reason why we would put the taxpayers on the hook instead.”

The coal mining industry has been arguing behind the scenes in Washington and in regional opinion pages that the coal tax at its current rate is “an unfair burden” and should be allowed to expire.

Kentucky Coal Association President Tyler White said that would not mean the tax is going away, rather it would go back to the level Congress originally intended.

“Extending current higher tax rates beyond their scheduled expiration, we kind of look at that as a tax increase,” White said. “At a time when we’re still experiencing a significant economic stress.”

White said that would hurt the coal industry’s ability to remain viable which, in turn, could put the trust fund in jeopardy if there is no coal production to be taxed.

Congress has reason to listen when the coal industry speaks. Coal mining companies and their political action committees doled out more than $20 million in political spending in the last two election cycles, according to an analysis of campaign finance records by the nonprofit Center for Responsive Politics. About 95 percent of campaign contributions went to Republicans and some of the top contributing companies have a major presence in the Ohio Valley, including Alliance Resource Partners and Murray Energy.

The mining industry’s aggressive lobbying appears to be paying off. For example, a draft version of a House tax bill had included a modest, one-year extension of the current excise tax rate on coal for the trust fund.

Then in late November the National Mining Association sent members of Congress a letter urging them to remove that section from the bill. The letter from NMA President Hal Quinn also warned that if the provision was not removed NMA “will include this floor vote in its Congressional Scorecard” as a negative mark against lawmakers.

When House Republicans released a new version of the bill in December, the coal tax rate extension was gone.

“Well it just shows you how responsive Congress can be to lobbyists from an industry that’s on its decline,” said Wes Addington, Deputy Director of the nonprofit Appalachian Citizens’ Law Center.

Addington is the son of a miner and the law center operates in Whitesburg, deep in eastern Kentucky’s coal country, where staffers work on black lung benefits and other mining community issues.

He noted that the trust fund has been especially important for Appalachian mining communities because of the region’s long history of mining and frequent problems identifying a company to take responsibility for a sick miners’ benefits.

Department of Labor figures support that. From 2009 to 2018, Kentucky, Ohio and West Virginia have been responsible for 63 percent of all black lung benefit claims the department received. In that time residents of the three states have relied on over $1.3 billion to from the fund to help pay for medical and other life expenses brought about by black lung disease.

“Why is McConnell not following through with his sort of promise to miners and their families in Appalachia?” Addington asked. “This fund that’s so crucial to their health and well-being,”

With just days left before Congress is scheduled to adjourn, the Kentucky black lung advocates weren’t ready to give up. They were planning one more visit to McConnell’s regional office.