Few dancers make it to the highest levels of classical ballet; of that already small number only a fraction are black women. But Misty Copeland has risen to the highest level, making history as the first African American female principal dancer with the prestigious American Ballet Theatre. Get an intimate look at this groundbreaking artist during a crucial period in her life in A Ballerina’s Tale, directed by Nelson George. The film airs on Independent Lens on Monday, December 24, 10:00-11:00 PM on WOUB. 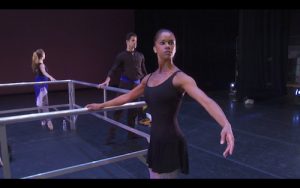 Born in Kansas City, Missouri, and raised in San Pedro, California, Misty Copeland did not begin studying ballet until the late age of 13. In 2000 she joined American Ballet Theatre’s Studio Company and the following year became a member of ABT’s Corps de Ballet. She continued to rise within the company, becoming a soloist in August 2007. In 2013, she was offered the lead role in Igor Stravinsky’s Firebird to be performed at New York’s Metropolitan Opera House, a major coup for a soloist.

The night of her performance Misty dances beautifully, but at the celebration afterwards she reveals she has been performing in great pain. She later finds out that her left shin has six fractures and will need corrective surgery. Many doubt she will ever dance again.

A Ballerina’s Tale follows Misty’s journey, from the triumph of Firebird to the painful road back to dancing, her return to the American Ballet Theatre stage, and her emergence as a pop culture star in the process. Interviews with a group of successful women who served as mentors for Copeland provide additional insight. 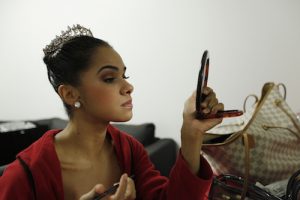 Misty Copeland’s career shines a light on the absence of women of color at major ballet companies, and how classical ballet’s emphasis on skinny bodies for ballerinas impacts the health of professional dancers and sends a negative message to young fans around the world. Misty, because of her race and her curves, is central to both issues in the classical dance world.

The film climaxes with a landmark performance by Misty in Swan Lake, an acknowledgement by American Ballet Theatre that she is back, dancing at the highest level, and the fulfillment of the dream of many to see a true black swan at a mainstream international company. A Ballerina’s Tale is the story of how great talent, a powerful will, and the support of a network of mentors can open doors within a very cloistered world.

Visit A Ballerina’s Tale page on Independent Lens, which features more information about the film.

About the Filmmakers
Nelson George (Director) is an author, filmmaker, television producer, and critic with a long career in analyzing and presenting the diverse elements of African American culture. Queen Latifah won a Golden Globe for playing the lead in his directorial debut, the HBO movie Life Support, a critically acclaimed drama that looked at the effects of HIV on a troubled black family in his native Brooklyn. He’s published numerous non-fiction books on black music history as well as a series of novels using the music world as a backdrop, including The Lost Treasures of R&B. George has been on a roll since 2013 with completed documentary projects: VH1’s rock doc Finding the Funk, Showtime’s Brooklyn Boheme, ESPN’s The Announcement, and All Hail the Beat, a short film for the Focus Forward campaign. 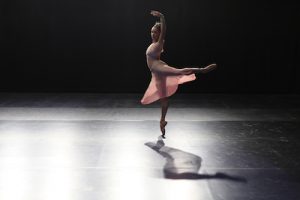 Leslie Norville (Producer) is a Brooklyn-based producer from Toronto, Canada. Her films have screened at numerous film festivals and on television around the world. Her first feature-length documentary premiered at the 2010 International Documentary Film Festival Amsterdam and is distributed by 7th Art Releasing. Norville currently collaborates with Nelson George on projects such as Finding the Funk, an official selection at the 2013 SXSW and Hot Docs Film Festivals, and Disdain the Mundane, an ESPN “30 for 30” short. Prior to her work with George, Norville had the opportunity to work with Lee Hirsch on his multiple award-winning documentary Bully and on Jane Wells and JK Wasson’s Tricked. Norville is Fund and a Funding Exchange grant.