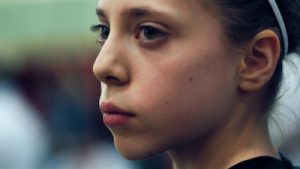 When Naomi Kutin, an Orthodox Jewish girl from New Jersey, broke a world powerlifting record at the age of ten – lifting 215 pounds when she herself weighed only 97 pounds – she quickly became a media sensation, earning the nickname “Supergirl.” This fascinating, intimate portrait follows her unique coming-of-age story as she fights to hold on to her title while navigating the perils of adolescence — from strict religious obligations to cyberbullying to health issues that could jeopardize her future in powerlifting. Directed by Jessie Auritt, Supergirl airs on Independent Lens, Monday, December 23, 2019, 10:00-11:30 PM.

Filmed over the course of three years, beginning when Naomi was 11, through her Bat Mitzvah at 12, through age 14, Supergirl follows Naomi and her family through training and powerlifting events as well as documenting their strong faith and involvement in the Orthodox community. 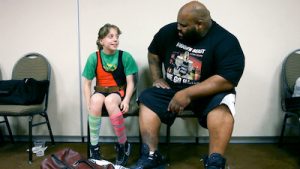 While powerlifting may not seem like a typical choice for a young girl, the sport is a family affair. Naomi’s father is an accomplished powerlifter himself and younger brother Ari has also taken up the sport.

As the years pass and Naomi grows and matures, she struggles to stay in her weight class and continue her winning streak. Can this young woman still be “Supergirl” if she can no longer break world records? With her close family supporting her, Naomi begins a journey toward self-acceptance, discovering the importance of both inner and outer strength.

“If you ever wanted to be a superhero, Naomi Kutin’s story is proof that it is possible,” said Lois Vossen, Independent Lens Executive Producer. “In addition to Naomi, the film reveals the story of her remarkable family — unorthodox Orthodox Jews who sometimes resemble human versions of The Incredibles. At a time when many of us feel helpless, Supergirl proves we should never give up on ‘the little guy’ — except today’s superhero is a super girl.” 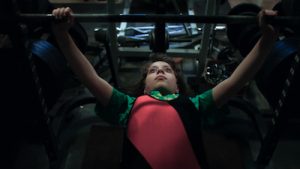 Visit the Supergirl page on Independent Lens, which features more information about the film.

Naomi “Supergirl” Kutin began her powerlifting career at the age of eight and breaking world records at nine. She is currently a 16-year-old junior at Ma’ayanot Yeshiva High School for Girls in New Jersey where she excels in both religious and secular studies. In addition to her powerlifting, academic and religious pursuits, Naomi enjoys running and works regularly with special needs children. She also loves to spend time with her family and friends and hopes to one day become a physical therapist.

Jessie Auritt (Director/Producer/Editor) is an award winning documentary filmmaker based in New York City. Her short film, The Birdman, about the quirky owner of a used music store, premiered at DOC NYC in 2012 and was an official selection at festivals across the country and received numerous awards, including the Grand Jury Prize for Short Documentary at Slamdance in 2013. Auritt made her first film, The Price of Education, about a single mother struggling to provide a better future for her family, as an undergraduate at Tufts University. In addition to independent filmmaking, she has shot, edited, directed, and produced videos for UNICEF, Great Big Story, IFC.com, The New York Daily News, and many other companies and non-profit organizations. Supergirl marks Auritt’s debut as a feature film director and editor.