“These 25 films presented by filmmakers from across the country illuminate themes of kindness, bravery and extraordinary resilience,” said Ira Rubenstein, Chief Digital and Marketing Officer. “As America’s home for documentary film, we’re hopeful that the unique and powerful stories, reflective of so many of the communities that PBS serves, will encourage engagement and contribute to the growing narratives online around identity and its complexities.”

The PBS Online Film Festival is part of a multi-platform initiative to increase the reach and visibility of independent filmmakers, and to provide a showcase for diverse storytelling that both inspires and engages. The Festival will be available via PBS and station digital platforms, including PBS.org. As in previous years, films will also be available to stream on YouTube and Facebook. View the trailer here.

Generating more than seven million streams over the course of the festival’s history, the PBS Online Film Festival continues to be an engaging annual digital event. The festival also received a nomination in the 2015 Webby Awards category for Online Film & Video: Variety (Channel).

Short films featured in the 2019 PBS Online Film Festival include:

An edgy woman attempts to convince her granddad to abandon his jazz club’s legacy for a mound of cash.

The Center for Asian American Media
“Rani”
A Pakistani transgender woman welcomes life’s challenges in order to care for an abandoned child. 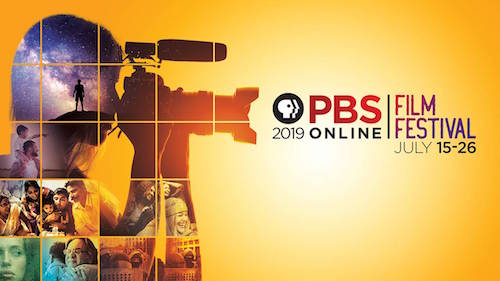 Detroit Public Television
“Who Are You?”
When a writer has a disastrous creative block, a delivery girl arrives with a mysterious box.

“The Shepherd of the Stars”
When the world began, a shepherd and his dog traveled by foot each day to blow in a magic horn and light the night sky.

Illinois Public Media
“BT Lives in the Stitch”
An involved high school teacher creates a knitting group that doubles as an after-school safe haven for students.

“Heroine of Hope”
In hope of assisting those stuck in the systems of addiction and prostitution, Scarlett titles herself “Momma” to improve the women’s livelihood.

KLRU-TV (Austin PBS)
“Audible Static”
When a young boy with a speech impediment falls in love, he takes extreme measures to overcome his adversary.

“Charlotte and Charlie”
As a young woman’s eyesight begins to fade, so does her ability to operate her most prized possession: her car.

KQED (Public Media for Northern California)
“Young Adult”
A teenager with cerebral palsy stops at nothing to connect with her first love.

Latino Public Broadcasting
“Ode to Pablo”
Challenged to a basketball game, a deaf Latino boy connects with another player, despite the evident language barrier.

Louisiana Public Broadcasting
“The Children of Central City”
A look at the impact growing up surrounded by violence in inner city, New Orleans.

NET Nebraska
“Under the Milky Way”
Travel to the dark skies prairie of Nebraska and reconnect with nature’s midnight majesty.

Pacific Islanders in Communications
“The Moon and the Night”
In rural Hawaii, a teenage girl must confront her father after he enters her beloved pet in a dog fight.

POV
“Into My Life”
Cassandra appreciates her late mother’s creativity by examining the Super-8 films she shot of 1960s-80s Brooklyn.

Reel South
“The Country Priest”
The impending border wall threatens a chapel and a local priest in Mission, Texas.

To The Contrary
“Love Wins”
A heartwarming love story which celebrates a relationship that was once forbidden.

Twin Cities Public Television
“All Square: Justice Served in a Sandwich”
Emily Hunt Turner challenges the narrative that stems from having a criminal record through her restaurant, All Square.

Vision Maker Media
“yoox̲atuwatánk (We Speak)”
Ranging from scenic views to tribal ceremonies, we delve into the lessons passed on through an indigenous ancestry.

WNET (New York Public Media)
“Beacon”
When a pilgrim’s arrival disrupts the congregation, one member begins to question everything.