Butcher started at WOUB in 1994

ATHENS, OH – When WOUB changes its programming schedule to assist teachers and parents through the #LearnAtHome Initiative or bring viewers the latest information on the Coronavirus outbreak, WOUB Director of Program Services and Chief of Staff Joan Butcher is the one who updates the WOUB schedule and makes the change seamless for the people of our region. Along with PBS programming, Butcher and her team have made sure Governor Mike DeWine’s daily news conference has been broadcast on WOUB to keep our region connected to what is going on at the state level. Like most WOUB staff, she’s been working from home the last couple of weeks and things have been challenging, but Butcher knows that what she is doing is important and is serving the mission of public media.

“This is why we do what we do,” said Butcher. “WOUB and public media is a trusted source of information and quality programming, especially in times like these.”

Butcher came to WOUB Public Media in 1994 with 13 years of public broadcasting experience already under her belt.  She strongly believed in the important service public broadcasting provides to local communities but could feel there was something special and different about both WOUB and the city of Athens.

“I made a lot of friends and became very active in community organizations,” said Butcher. “I really enjoyed my co-workers and the community.”

Butcher started as a traffic supervisor for WOUB television two days before the woman who served as the traffic assistant went on maternity leave. Butcher quickly found out how vital Ohio University student volunteers were to the operation.

“In traffic, we coordinate information from all the departments at the station to make the on-air product look smooth and professional,” said Butcher. “When I first started, I couldn’t believe that students were allowed to touch the equipment. But after my assistant went on maternity leave, and I was attempting to figure out how the computer system worked, I learned that students could be a tremendous help. A student walked into our office and said ‘Hi, I’m Gretchen. I know how to run this. Do you need help?’ I was so thankful, and she and I have stayed in touch over the years. I learned how much the students at WOUB and across campus have to offer.” 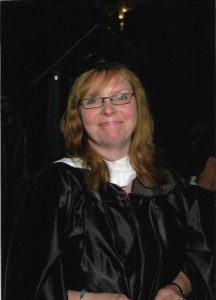 “It was a great opportunity to be able to finish my bachelor’s and master’s degree at Ohio University while I was working at WOUB,” said Butcher.

During her time at WOUB, Butcher has had a chance to interact with PBS and NPR on-air hosts and actors when they have stopped in Athens. She briefly spoke with the late Gwen Ifill, who was managing editor of both PBS Newshour and Washington Week, when Ifill visited Ohio University in 2013. She also was shocked to learn that she had made a lasting impression on David Newell, the actor who played the delivery man on Mister Rogers’ Neighborhood, Mr. McFeely.

“Before WOUB, I worked at WPTD in Dayton,” said Butcher. “I had worked with David Newell on events while in Dayton. When he came to Athens, I did not expect him to remember me.  But, he did! I was just so shocked that he remembered me from Dayton!”

While Ifill and Newell where both people Butcher admired for their well-respected careers in public broadcasting, it was someone a little closer to home that truly inspired Butcher in her own career.

“Former WOUB General Manager and Director Dr. Carolyn Bailey Lewis was truly a mentor to me,” said Butcher. Lewis was the first African American, female general manager of a public television station in the United States. She served in the role from 1997-2011. “It was so inspiring to see a female in that position. I always respected how she approached things and remained calm in difficult situations.”

In 2014, Butcher was one of three recipients of the Outstanding Administrator award given by Ohio University.

“That was one of the highlights of my career,” said Butcher. “I was so honored. My time at WOUB continues to be a great journey.”