The video, which condemns “fake news,” fakes a CNN segment from last year. Twitter’s move is unlikely to go unnoticed by Trump, who has vehemently resisted the company’s fact-checking attempts.

The Ohio Senate is being asked to consider a bill passed along party lines in the House that requires new reporting standards for COVID-19. Statehouse correspondent Jo Ingles reports. 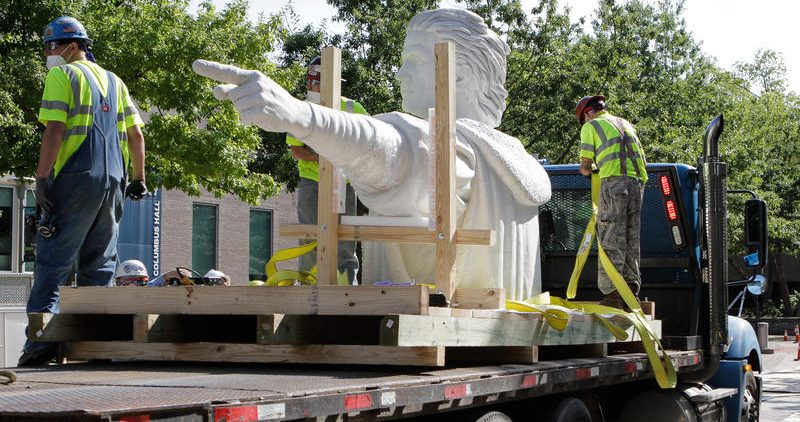 After Friday, Christopher Columbus will no longer stand at Columbus State Community College. In the early hours of the morning, the school began the process of removing and storing the statue, which had been covered with red and black graffiti the night before. The process will take about eight hours, officials said. Columbus State president… Read More

WOUB Digital · 101-Year-Old PBT Hopes Livestream Campaign Can Assist With Next 100 Days The Peoples Bank Theatre (222 Putnam St.) in Marietta has served the surrounding communities for 101 years in a wide variety of ways. Like all other performing arts venues throughout the nation, the theatre is facing financial uncertainty in the wake… Read More

Defining Moments Podcast is hosting multiple episodes about how food communicates and how we communicate about food. On this episode, host Dr. Lynn Harter talks with Dr. Kristen Okamoto and Sonia Ivancic about the unique challenges and possibilities of addressing hunger in rural contexts characterized by high rates of poverty. They discuss their research with… Read More

Like most everything else, Radio Free Athens has been impacted by the COVID-19 crisis. Although you won’t get to hear your favorite DJs on the air for a while, we will be supplying faithful listeners with playlists in the meantime. Find them below! From R@T  I have been going through boxes of stuff lately trying… Read More

A Previously Unreleased Thelonious Monk Concert Is Coming Next Month

The summer of 1968 looked like the summer of 2020. Americans were in the streets protesting racism, among other things. And a high school student in Palo Alto, Calif., got in on the action by enlisting the help of a jazz legend. Danny Scher came up with the idea to book Thelonious Monk to play his school’s… Read More

‘How are You Doing?’: COVID’s Impact on Zanesville, OH | “Assessing the Damage””

How Are You Doing?’ is a video series crafted by WOUB’s Doug Swift to document the social, cultural, and economic impacts of the coronavirus pandemic on the Southeast Ohio region, all through a hyper-focused lens on live music venue, restaurant, and brewery Weasel Boy Brewing Company in Zanesville, OH. Installments will regularly be uploaded to WOUB Culture… Read More

The Tiny Desk is working from home for the foreseeable future. Introducing NPR Music’s Tiny Desk (home) concerts, bringing you performances from across the country and the world. It’s the same spirit — stripped-down sets, an intimate setting — just a different space. At top of March when the COVID-19 pandemic became imminent, Griselda — the triple… Read More

CLEVELAND (AP) — The Cleveland Browns will induct kick return specialist Josh Cribbs and wide receiver Webster Slaughter into their Legends club this season. An undrafted free agent quarterback from Kent State, Cribbs developed into of the best returners in NFL history while becoming a three-time Pro Bowler during eight seasons with the Browns. Slaughter… Read More

GLOUSTER, Ohio (WOUB) — Sam Jones has been all around the world as a boxing professional and coach, but his biggest focus for many years has been educating and encouraging the kids in Glouster. Last Monday, he opened the front door at Sam’s Gym again for adults to train. Like every gym in Ohio, Sam’s… Read More