There are many ways artists to react to a crumbling world.

In the late ‘60s, the music of the Tropicália movement responded to cultural prohibition of a violent, nationalist Brazilian military government with a wildly rebellious amalgamation of American rock ‘n’ roll, joyful art-pop, and sonic collage.

In the early ‘80s, Scottish independent record labels Postmark Records and Fast Product countered both the prevailing super macho ethos of the music scene in Glasgow and Edinburgh and the gloomy sounds contemporary bands Joy Division and Echo and the Bunnymen with the gleefully jangly guitar and Motown influenced rhythms of Orange Juice and the arduous yet somehow pleasurable chaos of The Mekons.

And in 2020, amidst a global infectious disease pandemic, Athens musician Josh Miller turned to his four-track recorder to lay down sketches for the kinds of songs you can dance to.

“I was becoming more and more interested in doing something like some sort of dance music and specifically dance music influenced by ‘70s and kind of ‘80s funk and even maybe ‘70s and ‘80s pop as well,” said Miller. “I wanted to do something that kind of stood out in the music scene here, cause there’s not really a lot of that type of stuff.”

“Josh kind of went deep into four track territory, you know, and was just laying down all these ideas that kept coming to him and I was listening to some of them and I really liked them because, because they had that dancy element and they had this kind spacious kind of somewhere like lost in time kind of sound — with lots of heavy percussion overdubs,” said Crane. “As a drummer, it’s my goal to make people dance and move. And the fact that he was putting something together that didn’t sound like anything else really in Athens since it had that dance element in it. I was immediately drawn towards it.”

“I’ve always really been in punk bands and like stuff kind of focused around that, but then I’ve also always played music with Josh. So then when he came to me this project and it was just another opportunity to be part of something really cool, cause it’s definitely not something that I typically have ever played with before, but we have very similar tastes when it comes to that kind of music,” said Longanbach. “So it just kind of really fit together for me. And it was just honestly like a good, a really good learning experience, you know, playing something different.”

The band has already recorded a number of demos at Sonic Attack Studios in Columbus, and they plan to release a full-length album, maybe as soon as late fall 2021.

Being a band that came together at a time when live music was almost completely nonexistent, Pharo Raro was chomping at the bit to perform. An opportunity presented itself to play at a variety show at Stuart’s Opera House for the Athens Rotary – and Pharo Raro rose to the occasion. Next, Pharo Raro played at The Smiling Skull before finally gracing the stage of The Union on the same bill as The Greg Ashley Band July 10.

Their hopes for the show?

“We just want people to come out and have fun and not be afraid to dance if they want to dance,” said Miller. “And really just give some new music a shot, enjoy themselves. That’s what it’s all about for us. And I hope that happens.”

Listen to an audio version of this story embedded above, which includes a demo of Pharo Raro’s “Low Motion.” 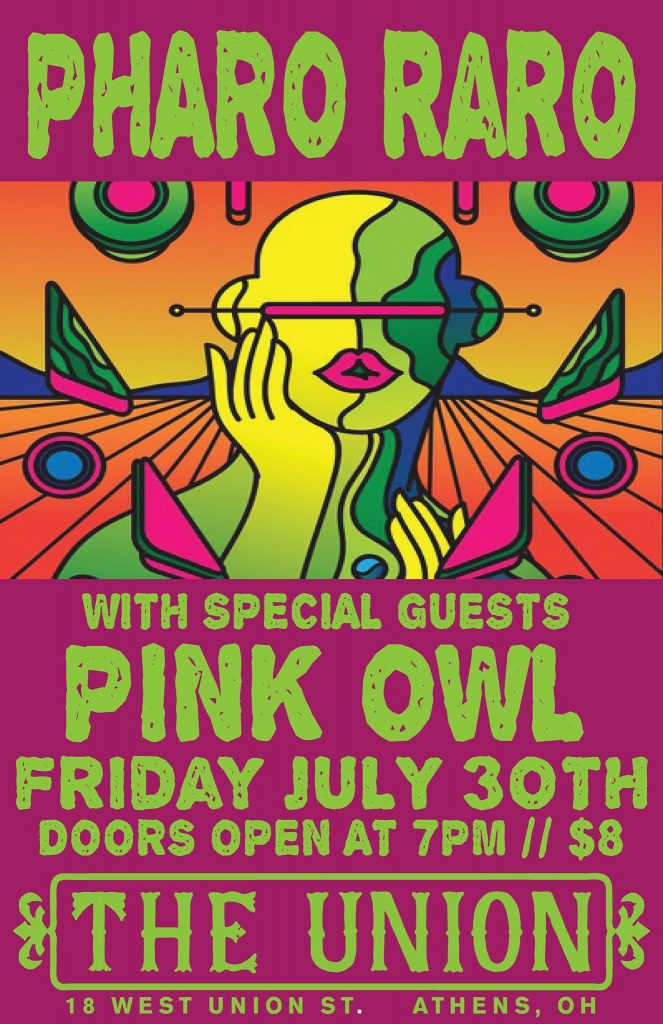