You are viewing the "Animals" Archives

COLUMBUS, Ohio (Statehouse News Bureau) — A new law signed over the weekend aims to help pets and the veterinarians who care for them. It’s no secret that veterinarians often have a lot of student loan debt. And shelters throughout the state often are full because of overpopulation. Rep. Brigid Kelly (D-Cincinnati) says this law will help pets and vets. “Vets can… Read More

Ever wondered how fast a white tailed deer can run? What their favorite food is? What makes their antlers grow? Explore this take home activity and join us to share and learn more about the role of these important animals.

ATHENS, Ohio (WOUB) — Two Athens County animal welfare agencies are teaming up to assist residents who may be unable to afford food for their pets during the coronavirus pandemic. The Athens County Humane Society and Friends of the Shelter Dogs have set up an email address to help those in need. “In the tough… Read More

Bill Would Ban Use of Gas Chambers for Pet Euthanasia

When animals are put to sleep in Ohio, they are most often euthanized with medications administered by a veterinarian. But there have been some cases where dogs and cats have been put down in gas chambers. Now there’s a new bill that would make that practice illegal. Democratic Rep. David Leland (D-Columbus) says most veterinarians use drugs to euthanized animals but he knows… Read More 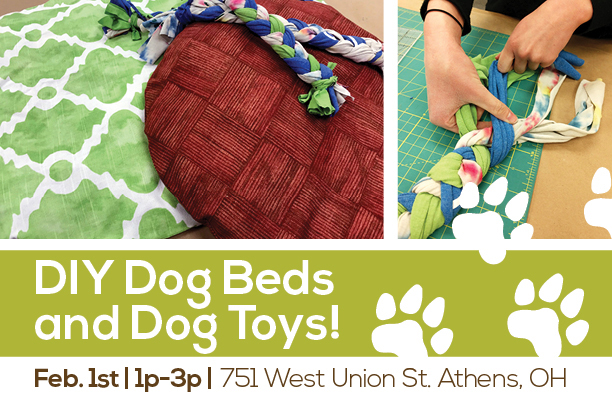 On February 1st, 2020, Athens Ohio MakerSpace and Friends of the Shelter Dogs will be hosting a class on how to create dog beds of any size out of reusable fabric and scraps! If you wish to make a dog bed, be sure to register for the class in advance at https://test.athensohiomakerspace.com/classes/ Dog beds are… Read More

On December 12th from 4:30 to 5:30pm at Coolville Public Library, Athens Ohio MakerSpace will be hosting a craft event for parents, their kids or any person who’s generally interested. Our instructor, Megan Rogers, will show attendees how to create cute, stuffed animals (or snowman) from sweater and t-shirt scraps. These creations would be wonderful… Read More

Since 2015, the U.S. Fish and Wildlife Service has killed more than 2,400 Barred Owls in a controversial experiment to stop the Spotted Owls rapid decline. The agency says it’s too early to know if it’s working, but critics say it’s wrong to kill one species to save another, even a threatened one. Watch:  What… Read More

In a controversial experiment, the U.S. government is killing one owl species to try to save another. The northern spotted owl population has been on the decline in the Pacific Northwest from logging across Washington, Oregon and California. After it was listed as threatened under the Endangered Species Act in 1990, logging was halted on… Read More

NEW CUMBERLAND, W.Va. (AP) – A former West Virginia horse racing commissioner says photos posted online of a euthanized thoroughbred racing horse surrounded by trash in a landfill should be a wakeup call for state leaders. Bill Phillips served for years on the commission before being replaced by Gov. Jim Justice in 2017. He told… Read More

1 Million Animal And Plant Species Are At Risk Of Extinction, U.N. Report Says

“Protecting biodiversity amounts to protecting humanity,” says UNESCO Director-General Audrey Azoulay, who warns that species are being lost at an alarming rate.