West Virginia Public Broadcasting’s Mountain Stage With Larry Groce is gearing up for their first 2021 taping with a live audience Friday, April 16 after a long and difficult year of cancelling scheduled, on-sale events (including a confirmed date with Led Zeppelin frontman Robert Plant) due to the COVID-19 pandemic. 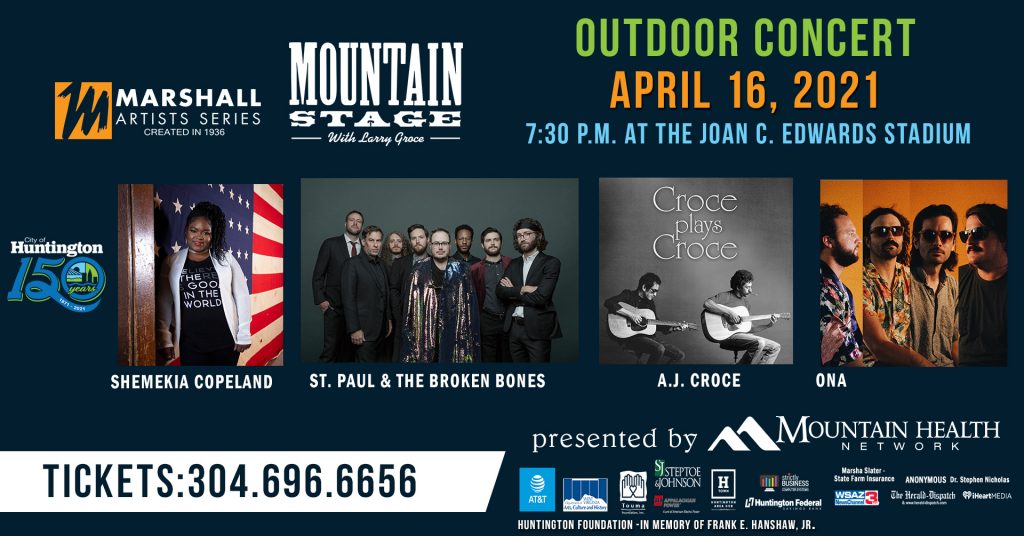 In 2020, Mountain Stage still managed to tape seven shows, four with an audience and three without. The show’s executive producer, Adam Harris, said this was possible only because of the strenuous health and safety protocols Mountain Stage implemented.

“We have a 38 year reputation with our artists, and we take great pride in that. We wanted to provide an atmosphere of safety for the artists that did have work they wanted to promote after most of the marketing and promotional opportunities they would usually have disappeared, if it could be done safely,” said Harris. “We wanted to be a safe haven artistically and creatively for them, and let them do what they do, but also literally provide a safe place for artists to come and perform and not be concerned about virus transmission.”

“Many of which are mundane, the kinds of things we are all sort of used to now, but for us, it was learning a lot of new tricks in a short time. Many of our crew members have been with us for upwards of 30 years, and we have been doing the show remarkably the same way for so long, so anytime we do anything slightly different, it can be a challenge,” he said. “I really have to commend our team, especially our band. And, of course, our crew, who really stepped up.”

Harris said that a generous grant from the Greater Kanawha Valley Foundation made it possible for Mountain Stage to immediately invest in masks for their crew; copious amounts of hand sanitizer; plastic bags to cover microphones between soundchecks and showtime; disposable windscreens for microphones; and even allowed them to reimagine their catering.

“It’s a big deal to feed 60 people, and that is just what we do during a normal day, not to mention what we had to do to implement safety protocols. It was a challenge, but everybody really stepped up and our caterer did a great job; we ended up putting together individual servings for everybody,” said Harris. “It was still really great food, even though it was packaged a little differently.

“We have a 38 year reputation with our artists, and we take great pride in that. We wanted to provide an atmosphere of safety for the artists that did have work they wanted to promote after most of the marketing and promotional opportunities they would usually have disappeared, if it could be done safely.” – Mountain Stage Executive Producer Adam Harris

With the grant funds from the Greater Kanawha Valley Foundation, Mountain Stage also to purchased industrial grade air scrubbers to run for 15 minutes at a time between soundchecks and for five minute intervals during showtime.

“Even after 38 years, we still found ourselves having to prove ourselves as somebody that was going to take this seriously; as a group that would provide a safe atmosphere for our performers and crew, no matter what. And I think we did that. A lot of the artists commented on that — on how safe they felt,” said Harris.

“Recording in front of a live audience is really what makes Mountain Stage unique. There’s not much of that on the radio these days. Usually things are recorded in a studio somewhere and there’s no audience response, you know? For us, our audience is very much a part of what we do, and their reaction is heard across the country each week,” said Harris. “So, we really look forward to getting back to having that roaring applause.”

The April 16 show will be an outdoors, socially distanced event with COVID-19 health and safety protocols in place. The performance is a part of Huntington, WV’s 150th Marshall Artists Series’ 84th season and a celebration of Huntington’s 150 birthday. Find more information, and buy tickets, at this link.

Ohio Woman 1 Of 32 Americans Named As A Rhodes Scholar