You are viewing the "Taylor Evans" Archives

What “Battlestar Galactica” Can Teach Us About International Relations

The science fiction television series Battlestar Galactica drew a legion of fans for its dramatic depiction of a robot genocide that leaves 50,000 human survivors searching for a new home… Read More 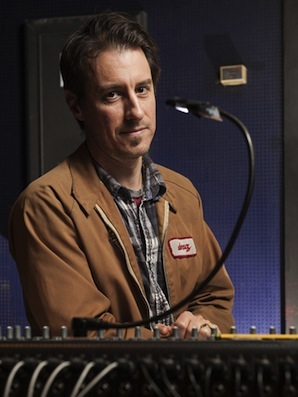 Although audiences may not always be aware of the work of the sound designer in the theater, it's a role that can be just as complex and important as that of director, according to Ohio University doctoral student Dan Dennis.

There’s No Place Like Homeroom: Athens High School Presents “The Wizard Of Oz”

We're not in Kansas–or The Plains, Ohio–anymore. At least not if the cast of Athens High School's The Wizard of Oz can help it. This weekend, audiences will be whisked away to a land of Munchkins, witches and ruby slippers, and Dorothy and the rest of the gang will be along for the ride.

Athens musician Bram Riddlebarger can officially add "novelist" to his resume. In his debut novel Earplugs, a man searches for a pair of earplugs while his small town undergoes big changes. The novel, Riddlebarger’s first attempt at a long work, has a surreal bent.

The next Brick Monkey Theater Ensemble production is centered around one of today's most hotly debated topics. 8, written by Academy Award-winner Dustin Lance Black, is a staged reenactment of… Read More

During his time as a math professor at OU, Jim Shirey started dabbling in nature photography. Now retired, his work has been displayed in several galleries in Ohio, Colorado and Georgia.

Starting this week, Shirey's work will be featured at Union Arts Gallery and Performance Space in Athens. (SLIDESHOW)

The Ohio University School of Theater is presenting the Stephen Sondheim musical Assassins, opening Nov. 28 and running through Dec. 8 in the Forum Theater. (PHOTOS)

Just in time for Halloween, Athens native and comic book artist/author Steve Richter has a new book, titled Afternoon of the Dead, a humorous take on zombies and horror movies. (PHOTOS)

A child’s imaginary friend is one of the most innocent things in the world, usually seen as a creative outlet by parents. Starting Oct. 3, the Ohio University School of… Read More

This fall marks the release of Charles Smith's book, The Gospel According to James and Other Plays, published by Ohio University Press.

Smith, an award-winning playwright whose work has received praise from The New York Times and The Chicago Sun-Times, is a Distinguished Professor of Theater at Ohio University.

Working with comic book legend Harvey Pekar could be considered the opportunity of a lifetime for a young illustrator, or any illustrator for that matter.

Dayton, Ohio, native Joseph Remnant did just that with Harvey Pekar’s Cleveland, Pekar's recent posthumous book that has received critical acclaim for both its writing and artwork.

People deal with their phobias in a variety of ways. Confronting them, ignoring them, denying their existence. Illustrator Steve Richter draws them. On Monday, May 14, Richter will host the… Read More

OU Prof’s Feature Film To Be Screened at Athens Festival

Friday, April 13 marks the beginning of the 38th annual Athens International Film and Video Festival, featuring dozens of full-length films and shorts from around the world. One of those… Read More

Theater audiences will take a trip down the rabbit hole this weekend with Athens High School's production of ALICE*, a musical twist on the Lewis Carroll classic. The high school… Read More

This weekend, musicians from across Ohio will come to Athens to participate in a weekend of performance and workshops at the Athens Jazz Festival. The festival is an annual tradition,… Read More

In her new exhibit, Barbie Falls on Hard Times, Kari Gunter-Seymour’s photographs feature the beloved children’s toy in a variety of situations that one would not associate with the doll,… Read More

The scene: an audience sits in Kantner Hall's Hahne Theater, a small venue that seats roughly 75 people. The room is dark, but a few beams of light illuminate the… Read More