You are viewing the April 8, 2014 daily archives

The Rio Grande bats exploded on Tuesday night, stomping Ohio-Lancaster with a 16-3 victory on the road. The RedStorm accumulated 10 hits against Ohio-Lancaster’s five, including two home runs that proved to be key. Kirk Yates led the RedStorm’s offensive attack, going 3 for 4 with a home run, a double, as well as three… Read More

It took less than 20 minutes for the Athens County Democratic Committee to name Rodney Smith as the official interim sheriff for Athens County Tuesday night. Smith defeated the only other nominee, Lt. Detective Jack Taylor in a 36-8 vote. All but two committee members were present at the 6 p.m. meeting to cast their votes…. Read More

For some community activists, students and faculty members at Ohio University the past months were busy ones: They had to watch movies. They had to watch more than a thousand movies that filmmakers had entered for the Athens International Film and Video Festival 2014. Eventually the organizers selected 300 films. This Friday, the screenings kick… Read More

Saul Phillips was introduced as Ohio’s men’s basketball coach Tuesday, and there is no doubt that he is excited about being in Athens. One of the largest draws of the job for Phillips was the recruiting base in Athens, Ohio. It could be difficult to recruit players to Fargo, North Dakota, as it is not… Read More

Australian bluesman Geoff Achison in performance at the Fur Peace Ranch from June 5, 2010.

Seth Borenstein, a national science writer for the Associated Press, will be coming to Ohio University to talk about climate change. At 5 p.m. on Tuesday, Borenstein will host a discussion in Baker 240. His talk, titled “Too Hot to Handle: What climate change is doing and why we don’t pay attention” will be open to… Read More

On a continued quest to be the best team in the state of Ohio, the Bobcats head up to Columbus for a Wednesday evening doubleheader with the Ohio State Buckeyes. The ‘Cats defeated the Buckeyes on March 7th in a 7-3 victory at the Red and Black Classic in Louisville, Ky. The win marked Ohio’s… Read More

Pomeroy Police Chief Being Sued By Gay Officer He Once Supported

The police chief that expressed his support for an officer who allegedly faced discrimination from a village mayor based on his sexuality is now named in a lawsuit along with other village employees. Kyle Calendine, formerly an officer for the Pomeroy Police Department, filed a civil suit on April 4 in Meigs County Common Pleas… Read More

Guitarists Frank Vignola and Vinnie Raniolo are joined by Julien Labro on accordion in a performance from August 21, 2010.

Following a fire that caused an estimated $15,000 in damages, the Good Works Timothy House is asking for help in raising funds to cover its insurance deductible. Firefighters responded to 91 Central Avenue Monday afternoon after a fire was reported in the laundry room of the Timothy House. According to Athens Fire Department Chief Robert… Read More

If you're a fan of political TV ads, you're going to love what will be coming up in the next presidential race. The U.S. Supreme Court's decision last week to lift the limits an individual can contribute to federal candidates is expected to send so much cash into television stations that account executives will worry… Read More 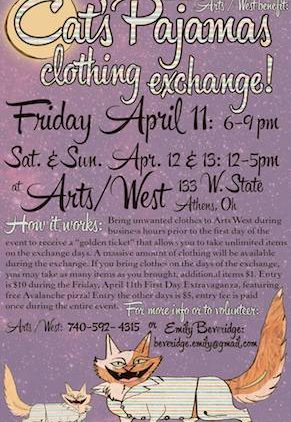 The annual Cat’s Pajamas Clothing Exchange returns to ARTS/West this weekend, with a “golden ticket” giveaway leading up to the event. For the past few weeks, ARTS/West has been accepting clothes and giving out golden tickets for the Exchange. The ticket offer ends this Thursday at 4 p.m. After receiving a golden ticket, participants may… Read More

College Athletes Are Not Employees Under Ohio State Law

An Ohio legislative panel is considering more changes to a midterm budget bill which is on track for a House vote this week. The House Finance and Appropriations Committee amended the proposal on Monday, clarifying that college athletes are not considered employees under state law. This is coming after a decision last month by a… Read More

Suspended Athens County Sheriff Pat Kelly is once again taking to his personal Facebook page to express his frustrations. This time, he is attacking those who have made changes in the sheriff's office since he was suspended in March. Kelly writes in his post that "in the past week, The Athens County Sheriffs Office has… Read More