The Ohio University Athletic Department posted eight program-best multi-year APR scores, according to the most recent scores released by the NCAA Tuesday. According to the NCAA, APR (Academic Progress Rate) is "a team-based metric that accounts for the eligibility and retention of each student athlete, each term." The most recent scores reflect a four-year average… Read More

Evan Shaw, WOUB’s editor and videographer, has been nominated for five Emmy® Awards by the National Association of Television Arts and Sciences’ Ohio Valley Regional Chapter. The nominations come in several categories. Shaw, along with Sean Fisher and Chris Sabo, has been nominated in the Sports – Program Feature/Segment for “The Scotty Hasting Story” category… Read More

Need a recipe for some fun on hot summer days? How about some cute flip flops for your next family gathering. This cute dessert is easy to make and will entertain both kids and adults. INGREDIENTS 1 crispy marshmallow bar (1.4 oz, 4×2 inches) Colored candy sprinkles 1 roll Betty Crocker® Fruit Roll-Ups chewy fruit… Read More

Nelsonville City Council To Vote On Removal Of Parking Meters

Following years of complaints from local business owners, Nelsonville City Council is expected to vote to remove the city's parking meters. Currently, there are still parking meters throughout town but the city is not enforcing them, said City Manager Mark Hall. An ordinance to remove the meters was tabled by Council in April, but was… Read More

Unable to reach agreement on a new labor contract, negotiations between the Athens County Commissioners and 911 dispatchers are headed to fact-finding July 2. The fact-finder will hear the positions of each side on the unresolved issues and fashion a settlement. If either side rejects that settlement, the matter then goes to binding conciliation in… Read More

Severe Weather Conditions On Wednesday Ripe For Possibility Of A Derecho

UPDATE 4:30 p.m.   On June 29, 2012, for the first time in recent memory the public became aware of a phenomenon known as a derecho. Meteorologists say conditions are possible for one to occur as a line of severe weather is expected to move through much of the Mid-Ohio Valley and Great Lakes regions Wednesday…. Read More 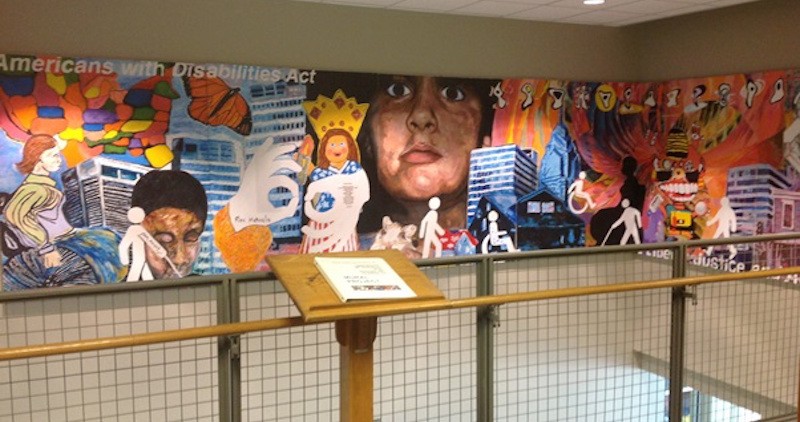 Disabilities Mural To Remain On OUL Campus Until 2015

The Americans with Disabilities Act 20th anniversary mural entitled Liberty, Justice and Access for All will remain on display at Ohio University Lancaster for another two years. It has been on display in the north lobby area of the Hannah V. McCauley Library upper level since August 2011. The six-by-30-foot mural was created to help… Read More

Gov. John Kasich wants veterans' military skills and service taken into account when they find civilian jobs, and he plans to order state agencies to help in that effort. Kasich will sign an executive order Tuesday requiring state agencies to consider that military training when determining equivalency for job licensing requirements. The governor also will… Read More

In the days following the fire, people have been visiting the site of the historic bridge with many expressing sadness over losing the landmark structure. Though the bridge had been closed to vehicle traffic for many years, County Commissioner Mike Bledsoe said the county spent money over the years to maintain the structure. Bledsoe emphasized… Read More

A 15-year-old boy was arrested yesterday for allegedly sexually assaulting a three-year-old from Scioto County. The Scioto County Sheriff says the juvenile has been charged with one count of rape, a felony of the first degree and is being held in the Ross County Juvenile Detention Center without bond. The arrest came after deputies responded… Read More

A Michigan man has been sentenced to 12 years in prison for traveling to West Virginia to have sex with a 12-year-old. U.S. Attorney Booth Goodwin says Ashlee C. Liebert, 34, of Whitmore Lake, Mich., was sentenced Monday in U.S. District Court in Huntington. Liebert pleaded guilty last October to traveling in interstate commerce with… Read More