You are viewing the June 1, 2020 daily archives

‘We Will Fight For What’s Right:’ People March For George Floyd In Athens

ATHENS, Ohio (WOUB) — Twice in as many days, more than 100 people rallied their voices and handmade signs in Athens on Sunday to protest the deaths of George Floyd and other black Americans. The group met on Ohio University’s College Green at  5p.m. and walked down College Street, past the Athens Police department, before turning… Read More

Officers didn’t have their body cameras turned on, and Police Chief Steve Conrad was later dismissed. National Guard members were also part of the incident and fired shots.

The Story of Cats, Asia to Africa | NATURE | Coming Wednesday at 8 pm

Employees are publicly criticizing CEO Mark Zuckerberg and organizing a virtual walkout amid a growing internal backlash over the company’s tolerance of the president’s posts.

The first astronauts launched by SpaceX declared victory Monday in NASA’s cosmic capture-the-flag game. They quickly claimed the prize left behind at the International Space Station nearly a decade ago by the last crew to launch from the U.S. SpaceX, you got the flag,” NASA astronaut Doug Hurley said a day after arriving at the… Read More

As local health departments try to contain the spread of coronavirus by tracking down those who might have been exposed to people with COVID-19, the Ohio House passed a bill requiring health officials to get written permission from people before beginning the contact tracing process. Statehouse correspondent Karen Kasler reports.

In Minneapolis, where Floyd died, a semitrailer drove into a crowd of peaceful protesters on an interstate. Elsewhere, there were reports of police firing tear gas and rubber bullets.

President Trump called Floyd’s death a “grave tragedy” that “should never have happened.” But once he was back on Twitter, he again inflamed tensions, with machismo and politics at the forefront.

With protests, Minnesota mayor sees both sides of the dividing line

Like most everything else, Radio Free Athens has been impacted by the current situation pertaining to COVID-19, which the World Health Organization has deemed a pandemic. Although you won’t get to hear your favorite DJs on the air for a while, we will be supplying faithful listeners with playlists in the meantime. Find them below!… Read More

New Lexington, Ohio (WOUB) — Investigators are looking for the driver who caused a fatal hit and run in Perry County.  According to a press release, the 2 vehicle crash happened on State Route 13 at approximately 9:30 Sunday morning. Penny L. Taylor, of Somerset Ohio, was traveling south on SR 13 in a 2013… Read More 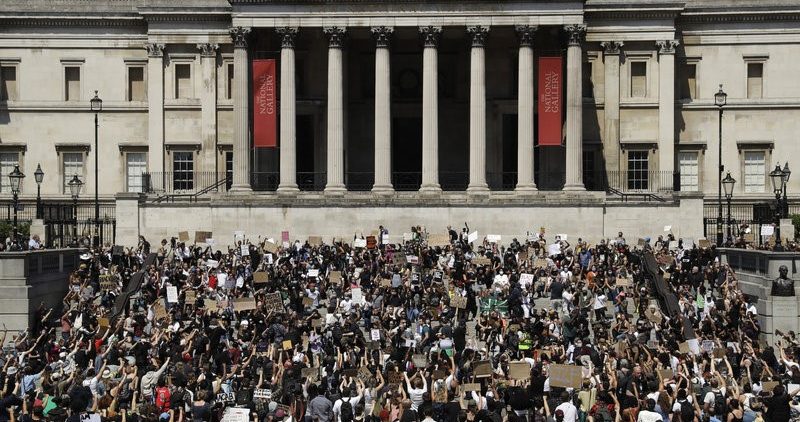 Demonstrations condemning police brutality and systemic racism continued throughout the weekend across the US, as worldwide, activists joined in solidarity. In Hong Kong, police have banned the annual Tiananmen Square vigil set to mark the 1989 massacre of peaceful protesters by authorities. In Colombia’s Amazon rainforest, coronavirus is threatening the Indigenous communities that make up a majority of the region’s population.

ATHENS, Ohio (WOUB) — Athenians of all ages met uptown on Sunday afternoon to chalk the sidewalks with messages, affirming support of the black community and calling for justice after the death of George Floyd. Former Minneapolis police officer Derek Chauvin was charged with third-degree murder and second-degree manslaughter days after the release of a… Read More

WOUB Digital · OU’s CoFA Reimagines Summer Art Programming Every year Ohio University’s School of Fine Arts provides a wide variety of summer art programming for children and teens — much of it designed to acquire early college credit for students interested in pursuing the fine arts. Due to the COVID-19 crisis, the in-person portion… Read More

How to care for someone in your home with COVID-19

Documentaries will be released each Friday at 8 p.m. ATHENS, OH – WOUB Public Media continues its free YouTube release of locally-produced documentaries this week to provide quality local entertainment people can enjoy at home as Ohioans fight the spread of COVID-19.  On Friday, June 5 at 8 p.m., WOUB is releasing Our Town: Morgan… Read More